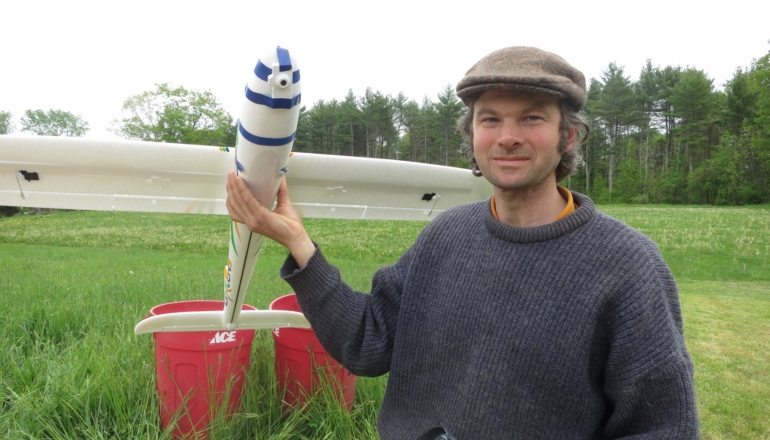 Dorn Cox is a founding member of Farm Hack, a worldwide cutting-edge community of farmers that build and modify their own DIY tools and machinery. His work focuses on collaborative open source research and development for regenerative agricultural systems. He´ll introduce Farm Hack to the Elevate audience during the event Good Food Future - Creative Responses from the Gardens and Fields at Forum Stadtpark on Monday October 26 at 13:00. Here´s the interview he gave us.

Agriculture represents the most basic form of how we, as people, understand and interact with our environment to support ourselves. I believe that creativity is an essential part of managing the complex biological, mechanical, social and economic systems that create infinite possibilities for expression, exploration and collaboration. Farm Hack community has been created to foster the the joy of creation and sharing, and to give every farmer the benefit of sharing their creative response anywhere on earth.

The most important strategy is to illustrate that the current models of extraction of human and environmental resources are only one possible expression, and that humans and agriculture also have the potential to regenerate, diversify and recarbonate our soils, and create a system based on regenerative abundance rather than scarcity. The abundant building blocks of atmospheric carbon, nitrogen and water can be assembled using the tools of  global genetic diversity. The complexity of the task is not trivial, but it is the project of the unfinished enlightenment.

The first land based economists and natural philosophers, the Physiocrates (meaning Govenernace of Nature), believed that increasing the productivity of soil was the basis of increasing wealth, and that all other activity is a form of extraction or transformation of that original wealth.  They also believed in the free exchange of all agricultural knowledge.

We make progress towards this goal by publicly placing our ideas into the creative commons, and inviting others to join in that action. This act is critical for illuminating alternative possibilities for a just, regenerative and resilient agricultural system. The dialog and process of collaborative development and free exchange of ideas resulting in democratic tools is a byproduct of the individual act of sharing ideas, and building on others accomplishments and creating positive deviance from the status quo of protection and extraction.

The first step is to participate directly in some form of agriculture, at any scale, and personally witness the improvement of natural resources at their hands. Agrarianism, and human’s power to improve diversity and productivity is the most inspiring and crucial building block of a society built on regeneration rather than extraction. The most basic economic equation is that two blades of grass can grow where one grew before, and that each of us has the means to exercise that basic economic process of wealth creation. Each person can prove that this is possible in their own window box, backyard, or field. The second step is to share ideas, observations, seeds, and inspiration directly with others. Farm Hack was founded to foster this exchange. The rest is just follow through.

Marquis de Mirabeau, the 18th century natural philosopher, proposed that civilization is like a tree, with agriculture as the roots, the population as the trunk and arts and commerce as the branches and leaves. The health of and resilience of the branches (commerce) and leaves and fruit (arts) is an indication of the health of the roots and the soil. The fruiting of the tree is an expression of a healthy system that we are all part of and in which we participate in all levels, but if the root system is weak the entire tree will wither and die. If we share our values and understanding of healthy soil and roots, we will be able to grow a flourishing, nourishing, and fruitful tree together. Arts in all its forms is not just an expression of whole systems health, but provides feedback necessary to build a resilient root system that will weather storms and droughts. Farm Hack, as a social platform, aims to be a commons where those shared values and interdisciplinary action can be expressed.


ELEVATE: What kind of society would you like to live in? What visions of the future give you the courage to continue your work?

I believe that through open knowledge exchange we can shift the balance from those who derive their power from protection and extraction of scarce resources to those who mix their labor with nature to create abundance. Freedom and liberty are possible through a process of mutually dependent independence. I believe in the promise of the enlightenment that we can  provide every citizen on earth with access to the knowledge to understand their environment and the scientific tools and curiosity to explore and improve the systems that support us all, and transform carbon, nitrogen, water and sunlight into a deep topsoil future. A society of global knowledge, but local production. Farm Hack builds on the tradition of the Encyclopédie, ou dictionnaire raisonné des sciences, des arts et des métiers (Encyclopaedia, or a Systematic Dictionary of the Sciences, Arts, and Crafts).

I am inspired by the evidence I see in our own improved soil health that has built on the strength of nature, and the cross pollination, adaptation, and hybrid vigor of ideas resulting in dramatic and measurable improvements. I am encouraged and  humbled by the networked power of open source technology and complex reciprocity. In spite of  the obfuscation to knowledge exchange built by the hegemonic forces of the status quo, our ability to build on the accomplishments of those who have come before us has accelerated in our lifetime and this gives me hope for the future.