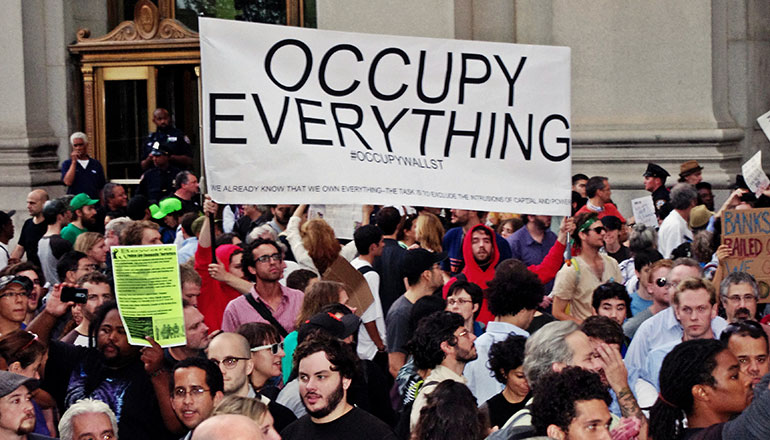 The Elevate Festival asks its guests to comment on this years' topic as well as the multiple converging crisis.

First up is Mark Brey, representative of Occupy Wall Street, who will take part in Elevate's new discourse format "Participate!" on Saturday, 27th of October via Videostream live from the US.

Mark Brey/OWS:
I think they show the limitations of trying to constrain the market through electoral politics because we see that after over a hundred years of trying to erect a more ‘friendly’ capitalism, the social safety measures that have been established are under attack. That’s why it’s so important for social movements to start to think outside of the political system to create forms of counter-power and foundations for resistance.

I think that global social movements are essential to changing course on a global scale because such a change would require broad-based democratic participation and these movements get people directly involved. But they certainly aren’t enough on their own. We also need people creating self-managed, directly democratic groups and federations to organize their workplaces, communities, and all facets of their life so we can start to live the sustainable, equitable alternatives that we preach.

What's your take on the central question related to thist year's festival topic "Elevate the Apocalypse?": Will humanity succeed in creating an economic system and a lifestyle based on justice, solidarity and respect for the planet's ecological limits? Or will it take big disasters before people start acting decisively?

It’s hard to know what will come, but strategically we need to prepare for both scenarios. By that I mean that we need to build up our organizing potential as movements and social justice groups to familiarize people with the dangers and threats to our collective well-being that are growing daily while also using these networks and organizations to generate the capability to respond in times of crisis.

Mark Brey is a representative of Occupy Wall Street, who will take part in Elevate's new discourse format "Participate!" on Saturday, 27th of October - via Videostream - live from the US.