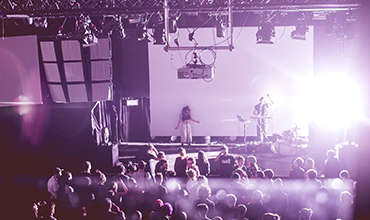 Deep into the night of Sunday 5 March, the thirteenth edition of the Elevate Festival came to a close with a final concert by Stephen O’Malley at Orpheum Extra. The new time slot at the top of the year proved to be fruitful with a staggering audience attendance and large media attention. This year’s content was marked by Big Data, Quantification and Algorithms. Besides the very well-attended music and discourse programme, it was the various art installations that brought new elements to the programme.

The jam-packed opening show introduced stellar guests such as Francesca Bria, activist Aslak Holmberg and the artist Manuel Beltran. This was followed by renowned scientist Evgeny Morozov who delivered a thrilling speech which deconstructed current developments revolving around the festival’s motto. A/V artist Oravin interspersed the speeches with musical events and journalist Barbara Wimmer also joined in on musical offerings. The following musical programme was presented by the world-famous Sónar Festival: Vienna-based Zanshin and the video artist Alba G. Corral churned out an impressive A/V show while the American duo KNOWER and D.J. Detweiler moved the audience in a cryptic fashion.

The springlike weather allowed for more and more guests to visit Forum Stadtpark and attend the large variety of discussions, workshops and film screenings. As usual, the discussions allowed for sociopolitical questions which were dealt with within the context of the festival’s focal points. One session in particular, “From Smart Cities to a City Of Commons” was met with a great amount of public interest. Renata Avila, Evgeny Morozov and author Duncan Mclaren posed questions on social innovation and discussed new forms of democratic co-determination and co-creation of our environment.

Another topic of discussion this year was the so-called quantification of nature, which was handled by Aslak Holmberg, a spokesman for the indigenous peoples of Finland, anthropologist Tommy Ose and Inge Fiala on Friday. They explained current developments concerning the matter and zeroed in on the several different approaches to nature and addressed the international solidarity of indigenous peoples.

Saturday saw the city walk regarding algorithms in the public space, which appealed to a large amount of guests. Several interested people converged on the hotel eSeL and walked around the city of Graz. During this walk, they encountered the installation openings of Painted By Numbers, Drone Shadow and Speculative Capital. These installations were on display until March 10th.

Also very popular was the discussion on Sunday with internationally known internet activist Max Schrems who, alongside equally acclaimed journalist Ingrid Brodnig and social scientist Julia Krüger, debated the role and responsibility of media in the age of big data.

After the very diverse opening night, the audience was invited to a more experimental intersection on Thursday night at Forum Stadtpark. As a part of the Dunkelkammer series, artists Kutin/Kindlinger and Susanna Gartmayer performed in the Forum cellar. Before all that, hoergeREDE presented the world premiere of “SUPERANDOME”, a live four-channel audio piece by the young Grazean playwright Natascha Gangl, in collaboration with sound architects Rdeča Raketa.

One of the highlights of the sold out Friday night lineup was Jenny Hval, who performed at Dom Im Berg. The Norwegian, who had just received the famed Nordic Music Prize for her recent Blood Bitch album the day before, enthralled the audience with her beautifully fragile voice and her sometimes mournful lyrics. Tropic Of Cancer followed with an equally emphatic concert which made way for Jon Hopkins and his hypnotic and danceable DJ set. Meanwhile, the Tunnel floor was filling to the brim as Shackleton, A Made Up Sound and Ancient Methods surpassed all expectations with their respectively bombastic sets.

Saturday was also sold out in pre-sale and drew Detroit techno fans into Dom Im Berg. Die Viennese duo Pulsinger & Irl served up their flawless live set between dub and acid techno. After a sensational show by Paranoid London, who managed to propel the audience’s energy even further, the evening’s headliner and techno grandfather Juan Atkins finally took over the stage with a brilliantly rhapsodised performance. At the same time, the Different Circles Label Night went down in the Tunnel, where drawling beats, shimmering melodies and UK bass drove on into the early hours. The Dungeon floor was fraught with a vast musical offering: Besides the extraordinary live act Lorenzo Senni, who oscillated between rhythmic drum sequences and rave/trance soundscapes, it was SØS Gunver Ryberg who stunned the audience with his multi-layered sound collage.

The final show on Sunday night at Orpheum Extra was a highlight in and of itself and offered many surprising moments. The formation Hungtai / Maranha / Ferrandini managed to contort between experimental free jazz and noise rock while delivering a coherent and and diverse concert. The Viennese cult band Radian impressed with their densely superimposed tonal and sonic elements. The advertised highlight of the night was the high-decibel performance by Stephen O’Malley who captivated his audience with grand drone-scapes, fragmented guitar riffs and tinkering noise interferences.

The next instalment of the Elevate Festival will take place from 1 - 4 March 2018 in Graz. In this, the final year of the cooperation initiative We Are Europe, Elevate will invite Reworks Festival from Thessaloniki and TodaysArt from The Hague to Graz.

The organisational team Bernhard Steirer, Daniel Erlacher and Roland Oreski would hereby like to thank everyone who attended the festival, a fantastic team of co-workers and all media partners,  patrons and sponsors.