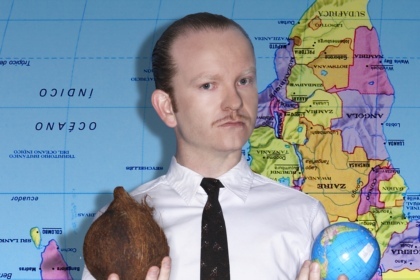 Born in Frankfurt am Main, now living in Chile, Uwe Schmidt could have established a record without even knowing it, according to Wikipedia he's got 63 monikers or projects.
And as if this wasn't enough: These monikers are changing- his most important alias Atom Heart transformed into Atom™.
As Senor Coconut Schmidt releases albums referring to musical styles such as BaileFunk- and Reggaeton, his new latino- style versions of old Kraftwerk- classics make him famous.
1994 he founds his own label "Rather Interesting".
Together with Burnt Friedman Schmidt is running a project called Flanger, discovering a jazzy past, that is the root for all kinds of popular music nowadays.
2008 sees the release of "Around The World With Señor Coconut And His Orchestra"- Schmidts latest album.
With a new live show, Atom™ is back on stages worldwide.