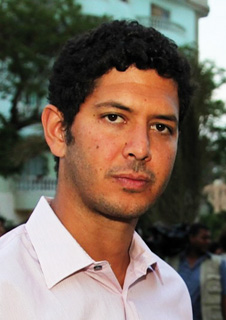 Sharif Abdel Kouddous is an independent journalist based in Cairo, Egypt. For eight years he served as a senior producer, co-host, and correspondent for the independent TV/radio news hour Democracy Now! He has reported from Baghdad during the Iraq war, New Orleans in the aftermath of Hurricane Katrina, Haiti in the days after the January 2010 earthquake and during the return of former president Jean-Bertrand Aristide in 2011, climate summits in Copenhagen and Cochabamba, and from Egypt during the revolution.

He has written for The Nation, Foreign Policy, Al-Ahram Weekly, and Al-Masry Al Youm, and has appeared on numerous national and international TV programs, including MSNBC’s The Rachel Maddow Show, The Ed Schultz Show, and Hardball with Chris Matthews, and on Al Jazeera English.

HBO is currently developing a documentary based on Kouddous’s reporting during the Egyptian revolution.

PRAISE FOR SHARIF ABDEL KOUDDOUS’S REPORTING
“Without Sharif Abdel Kouddous’s brave and tireless reporting, the full story of the historic Egyptian revolution would have been incomplete. Around-the-clock for weeks, Kouddous served as a one-man news machine, single-handedly out-reporting major corporate news networks, using little more than a cell phone and sheer guts to deliver the most riveting coverage of any reporter in Cairo’s Tahrir Square. Kouddous is one of the most promising young journalists of our time.” — Jeremy Scahill, author of Blackwater: The Rise of the World’s Most Powerful Mercenary Army

“For weeks I was glued to Sharif Abdel Kouddous’s on-air reports, articles, and tweets from Egypt. No reporter provided a more reliable mix of on-the-ground reporting, local knowledge, and learned analysis. He was our eyes and ears. This is exactly the kind of versatile, passionate, and courageous reporting that is the future of journalism.”
— Naomi Klein, author of The Shock Doctrine: The Rise of Disaster Capitalism

“Sharif is the best kind of reporter: brave, hard-hitting, compassionate, intelligent. His reports from Tahrir were riveting. His ability to describe the complex, fast-moving and dangerous dynamics of a revolution in realtime earned him a worldwide audience that looked to him to capture and interpret this epic moment in history. Whether he was tweeting, writing columns or crafting 20-minute video broadcasts, his eloquent urgency was captivating. Sharif is a model for the next generation of independent journalists.”
— Amy Goodman, host of Democracy Now!