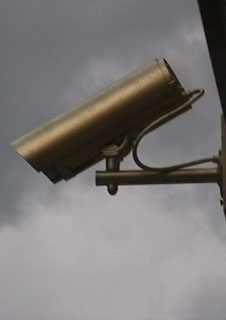 A procession pulls through Graz and gathers around surveillance cameras with priests bearing crosses. "Our camera, who art in the city center...." is sung and chanted, bypassers are given leaflets which proclaim demands such as preventing the tapping of phones or the installing of cameras in bedrooms.

The main square sees policemen avidly working against the prohibition of alcohol. They conciously sniff out the contents of wine and vodka bottles being happily consumed by the group. Disappointment sets in as they realize that these "drunks" are enjoying nothing other than water and juice. The authorities are forced to leave, but the scenario they set out to disrupt stays perfectly intact.

Pedestrians in the Herrengasse find confusing sheets of paper on the street: An „Urban Liberation Army“ threatens to destroy any and all public signs of state violence - protesting against the permanent violence in our society. This threat is realized a few hours later, infront of the police who see no reason to interfere.

A procession that silently worships surveillance cameras; public, non-alcoholic consumption of vodka bottles to question the prohibition of alcohol. In the year 2010, many activists tried to make people aware of the increased monitoring of public spaces and social repression using things like the aforementioned happenings as a catalyst. Instead of setting up yet another info booth, they opted for irritation, exaggeration and irony. Following the motto of communicational Guerillas: distort existing codes if they cannot be destroyed.