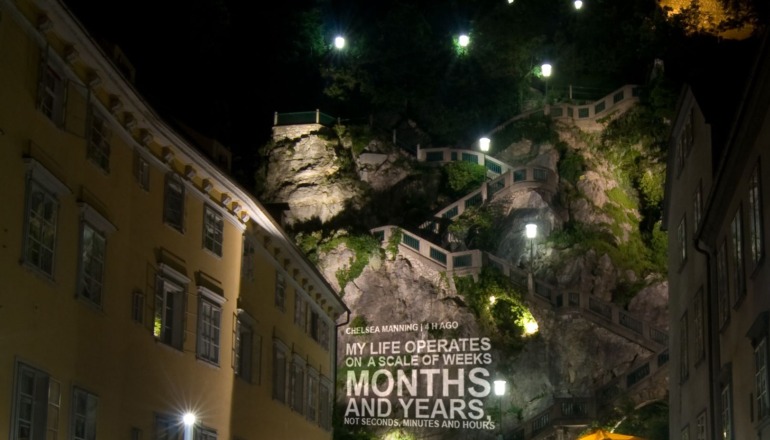 Public intervention for Elevate, Graz and The Influencers, Barcelona

Chelsea's Wall is a public intervention which takes place simultaneously at The Influencers Festival in Barcelona and Elevate Festival in Graz. The performance projects Chelsea Manning's latest Tweets onto public walls within the two cities, giving them a presence outside of the digital. 140 characters from prison directly onto city walls.

Chelsea Manning was sentenced to 35 years in prison by a military court for the disclosure of military documents to WikiLeaks. After her trial, Chelsea Manning publicly stated that she is a woman and that she intended to start hormone therapy as soon as possible. Since April 2014 her name change from Bradley to Chelsea is official and in Febuary 2015 she was granted the undergoing of hormone therapy while in prison by the US army.

In April 2015, Chelsea Manning published her first Tweet out of the military prison in Fort Leavenworth in Kansas, where she is imprisoned. Since then she has been regularily tweeting about life in prison and her physical transition to becoming a woman.

Chelsea's Wall gives a public presence to Chelsea Manning's Tweets by projecting them onto buildings in city centres. This gives presence to a voice that reflects on and views our times from a unique perspective. A voice which adds to the ongoing debates around freedom of information, gender roles and the legitimation of power. A voice which epitomizes our times like few others. Her mostly personal tweets talk of life in prison, her struggles with the legal systems and undergoing hormon therapy.