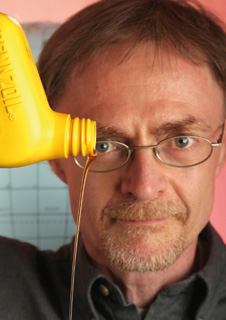 Author of ten books, including The Party’s Over, Peak Everything, and the soon-to-be-released The End of Growth, Richard Heinberg is widely regarded as one of the world’s most effective communicators of the urgent need to transition away from fossil fuels. With a wry, unflinching approach based on facts and realism, Richard exposes the tenuousness of our current way of life and offers a vision for a truly sustainable future.

Senior Fellow-in-Residence at Post Carbon Institute, Richard is best known as a leading educator on Peak Oil—the point at which we reach maximum global oil production—and the resulting, devastating impact it will have on our economic, food, and transportation systems. But his expertise is far ranging, covering critical issues including the current economic crisis, food and agriculture, community resilience, and global climate change.

Richard’s latest book, The End of Growth: Adapting to Our New Economic Reality makes a compelling argument that the global economy has reached a fateful, fundamental turning point. As energy and food prices escalate and debt levels explode, paths that formerly led to economic expansion now go nowhere. The “recession” will not end in a “recovery,” yet in the coming years we can still thrive—if we maximize happiness rather than the futile pursuit of growth at any cost.

Richard is a much sought-after speaker and has presented in dozens of countries and across the United States. He’s featured in many documentaries, including End of Suburbia and Leonardo DiCaprio’s film 11th Hour. Richard has appeared on ABC’s Good Morning America, Canadian Broadcasting Television, BBC, Australian Broadcasting Corporation, and Al Jazeera, as well as numerous radio programs (national NPR) and print publications (Time magazine).

He lives in northern California with his wife and is an avid violin player.

From Scarcity to Abundance