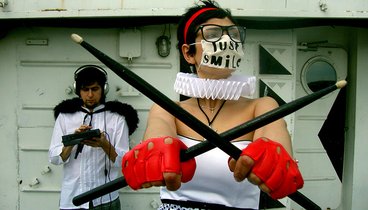 The term „Interpenetration“, represents the fundamental concept of unimpeded collective penetration and an anarchic system of coexistence as a result. The event series “Interpenetration” can be seen as a test run for said system as it presents extraordinary experimental music, refreshing performances, curated improv evenings, interactive digital art and to top it off, an anti-capitalistic way of thinking and working.

The Interpenetration Stage at the Elevate Festival is a lot like a demo that gives you a taste, but can of course only show certain parts of the game. The main focus lies on Rock, Techno and Noise, in a sense. But the evening’s first act, Radikal Satan (FR) will demonstrate how little Interpenetration associates itself with said genre boundaries and chooses confusion over clarity. Radikal Satan’s complex music could very easily serve as a Film-noir soundtrack and it also deals with themes such as love and manslaughter.

The evening will progress in a more hearty and danceable fashion when the Armenian duo Wattican Punk Ballet take the stage with their mix of Psychedelic Rock, Dance Punk and Freak Pop. Also a delight to watch on stage, thanks to their outlandish stage performance and constant changing of instruments.

Runes, a duo from Graz are in a permanent state of transition. Musically, they move between concrete and abstract interplay, invariably pushing experimentation to the forefront and disregarding genre boundaries.

Black Manna, consisting of Dr. Nachtstrom and David Pfister, process their interest and dedication to the occult, spiritual and religious in musical rituals and will most definitely raise some midnight creeps among festival guests, mainly due to their extensive use of voices from “beyond” and Jörg Vogeltanz-provided visuals.

iBootz (the interpenetrated form of Henry Bootz) will counteract any spoilage of mood with his Terror-Techno-Noise as the night draws deeper.

The night will be rounded out by the Interpenetration DJ Team. This team is an open collective of music players that specialize in anti-specialization and present exceptional, more or less experimental music.