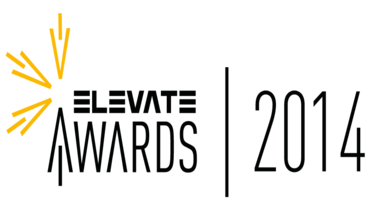 David Charles writes from the Elevate awards show, revealing the winners and the reason why we all love each other.

The Elevate Awards shine a light on the people and projects that are cultivating a planet that is more sustainable, more innovative and more just. Goaded on by our host Herr Hermes and watched by the crowd in the Dom Im Berg and national television cameras, the award nominees have the chance to share their work. The winners take home €2,500 prize money to elevate their work to the next level.

There are three awards tonight. The International Award is given to projects based outside Graz, the Artivism Award to artistic groups with a message, while the Steiermark Award is presented to projects from the local region of Styria.

The International Award garnered twenty-six nominations from across the world, Latin America to South Africa, and on global issues ranging from the environment to human rights. Ksenia Ermoshina, presenting the award, made special mention of the fourth placed nomination: the solidarity letter for the liberation of Josef S. “As a Russian,” she says, “human rights are being oppressed everywhere – and the western world is not an exception.”

The international jury came to unanimous decisions on the top two nominees for the award. Both were projects concerned with internet privacy. “Maybe we're all paranoid on the jury,” Ksenia jokes, “but we think privacy is important.”

Second place went to riseup.net, which provides secure communication for activists. But the winner of the 2014 Elevate International Award went to Cryptocat, an encrypted internet chat app. “Cryptocat is a great choice,” Ksenia explains, “because it tries to make privacy accessible. Anyone can be encrypted – even if you're not an activist.”

Nadim Kobeissi, the founder of Cryptocat, comes on stage to accept his gold painted statue and the oversized cheque for €2,500.
“Sorry, I don't speak German,” he says. “I only know how to say, 'Ich liebe dich'.” The audience laughs. “Am I supposed to say a few words?” he asks Ksenia.
“Encrypted please,” she replies.
Nadim laughs. “Have you all got your AS encrypters?” Bafflement creeps over the crowd. “I don't think anyone got that joke.” Then we laugh.

Nadim explains the ethos of Cryptocat. “People should be taking complicated things and making them simpler,” he says. “There's a lot of elitism in technology and that's always bothered me a lot.” Nadim started developing Cryptocat in college. He wasn't studying computer science, so had to rely on the open source community. “They were the ones who pointed out encryption problems and made Cryptocat more secure.” Nadim feels this collaboration, community and mutual respect was and remains the most important aspect of the project. “If we deal with each other and the world honestly and transparently then this is what ends up benefiting us and the public.”

The Artivism Award went to the Partycipation group, who, through their camps and festivals in Lower Austria, encourage community and lively exchange on an intellectual and practical level. They bound on stage to give us a demonstration that involves a song about how “the fishes are going to love me more than you ever done” and a drawing of dancers with broken hearts skipping hand in hand across an ocean. Julian Leutgeb explains that Partycipation are trying to show that art can be meaningful and fun.

The Steiermark Award attracted 27 local projects and, after the counting of over 1,500 public votes, was given to Kama Graz, an organisation that flips the usual experience of migrants and asylum seekers and education on its head. Instead of forcing them to attend German classes and classes in Austrian law and culture, Kama Graz provides the opportunity to migrants to use their talents to become teachers. In Austria, as in the UK, asylum seekers are forbidden from working throughout the long years their case is considered by the authorities. These classes give them an opportunity to use their skills and to participate in society. They are also the perfect setting for exchanges between asylum seekers and local residents in Graz.

As for me, I know I'm not alone in being glad to hear that. After four days of discussions, deliberations and dancing, I am a stronger person than I was before. I am stronger because I know I am not alone in believing that a more commonistic, connected and creative world is possible. In fact, thanks to Elevate, I don't have to only believe; that world is already here, waiting for us to join.

In a post-party human circle, thirty or forty of the organisers, producers, artists, activists, technicians, and musicians who make Elevate elevate, raise shots of zirbenschnapps to the only toast you ever need: “Ich liebe dich!”