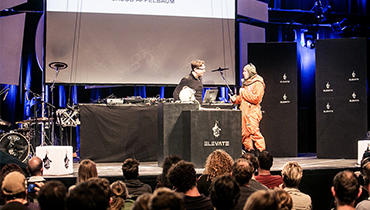 A hollowed cave, buried deep in the bosom of an Austrian mountain. Darkness ripples over the crowd. The subterranean envelops us, the atmosphere increasingly oppressive, like we are trapped in the underground volcano lair of one of the more flamboyant Bond villains. The compacted earth above and around us vibrates with the bass thrum of expectant conversation, then... David Charles blogs about the events of the Elevate Festival.

You can hear more from Ann Roth on Thursday in the session Open Everything and at her Saturday workshop, Me and My Shadow, which will try to help people understand where we leave little traces on the net and how we can protect ourselves.

The 2013 Elevate Opening Speech is delivered by Jacob Appelbaum, a man who could have been cast as uber-geek "Q" in our Bond film - if he hadn't been exiled to Germany because the US authorities think he's a terrorist. "For states, openess means that our lives are an open book. But for us, there is a different level of openess." There is a fuller record of his speech here.