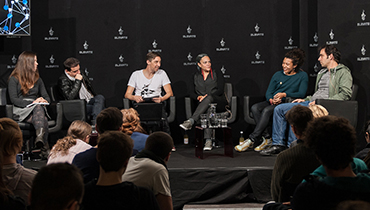 What the Woop Woop is Creative Response?

David Charles blogs about the events of the Elevate Festival. This is his review of friday's panel discussion "Creative Response/Ability" and the film "Let Fury Have The Hour".

Antonino d'Ambrosio grew up in Philadelphia during the Reagan years; not a politically auspicious start for the son of a immigrant bricklayer, you might think. Then, all at once, Antonino discovered the mysteries of punk, rap, graffiti and the skateboard. And, as he transformed his city walls into canvasses and his sidewalks into skateparks, he realised that another world was possible.

These art forms, which grew up in the free space between public and private, permitted and prohibited, Antonino calls “creative response”.

The rest of this evening's panel contributed their ideas of what creative response means to them as artists. For Ursula Rucker, a US spoken word artist, “creative response is everything I do. It's why I'm sitting here, why I don't give up.”

Ksenia Ermoshina's creative musical response is with experimental noise. “Noise is somehow a metaphor for everyone who is marginal – for us, here,” she says with gathering excitement. “We are kind of noise for global corporations. Let's be noisy, let's become noisy and break into the frequencies of this culture.” On cue, the crowd breaks into applause, laughter, whooping.

And, of course, as Antonino says, the Elevate Fesitval itself is a creative response: electronic music and visual arts side by side with intense political discussions. Dom Im Berg, the heart of the festival, is a cave that was hollowed out by slaves and is now transformed into a place for all to come and celebrate our common struggles.

“We all have the talent to creatively respond,” Antonino says, in conclusion. “Maybe not as a painter or a novelist, but as a citizen of the world. That's very important.”

For a fuller exploration of creative response and Antonino's ear-popping soul-dropping film, “Let Fury Have the Hour”, you'll just have to wait for the book of Elevate 2014!