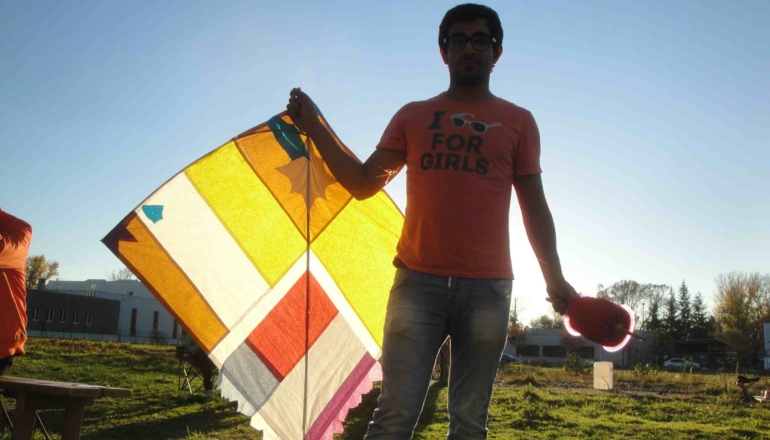 Darvishi Darvish fled from the Taliban regime from Kabul to Austria in 1996. He was forced to give up his studies of history a philosophy. At the Austrian border a police officer took him in and offered kindly a cup of tea. After his long and life threatening journey – the story of which was performed by artist Edda Stobl several years later – he felt himself arrive in paradise.

The assumed paradise showed its flip side shortly after the warmhearted welcome. During nine years of waiting for his residence permit, Darvishi got by as warehouseman and freelance interpreter. The Styrian Bleiberechtsplattform (platform fighting for rights of residence) helped him to get through the grinding years of going through the procedures for getting granted the right of asylum.

The Graz kite meetings „Art Kabul“, which will take place for the fifth time this year, startet in the context of the integration project „Die Villa, in der wir wohnen“ („The villa in which we live“). The project aims at empowering migrants. Together with Graz artist Norbert Prettenthaler, Darvishi created the installation „Asyldrachen“ („asylum kite“), which found permanent residence in the premises of the European Training Center for Human Rights.

Darvishi also conducted intercultural workshops on the topic of anti-discrimination in the non-profit organisation Isop in Graz. His dedicated ongoing work was honoured with the award „Karriereticket“ by Österreichischer Integrationsfonds.

In his free time Darvishi writes poems in his native language Farsi, some of which have been translated into German. Darvishi hopes for „up winds at Elevate“ in order to get into fresh and intensive dialogue with fellow human beings.