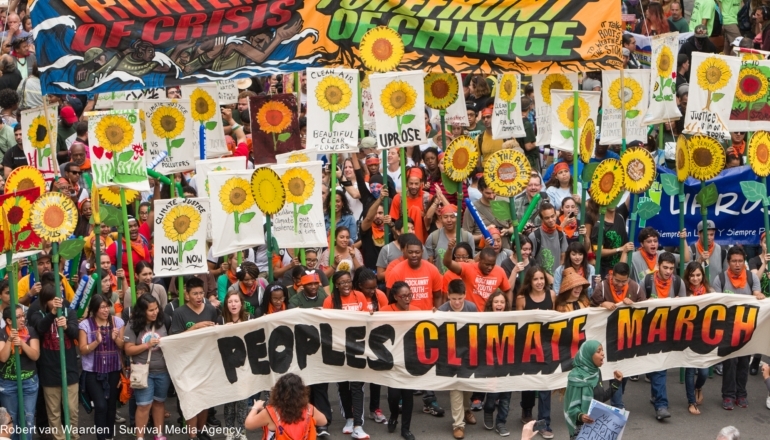 Climate change is the biggest challenge of our time. Its impacts kill increasing numbers of people, destabilize entire societies and force millions into migration. It destroys vitally important ecosystems and is one of the main causes of the ongoing sixth mass extinction in the history of life on earth.

Rising carbon emissions are caused by the burning of fossil fuels, industrial agriculture (primarily the production of animal-based products) and rapidly advancing deforestation. Despite this fact, the measures introduced by governments and transnational institutions to confront these immensely destructive activities aren´t even close to what´s needed.

Leading climate scientists predict that humanity willl face a very grim future if we continue with business-as-usual. Naomi Klein puts it in a nutshell with the title of her new book, „Capitalsm vs. The Climate“, and we must change our societies radically (Latin: „at the root“) if we want to provide our children and grandchildren with a liveable future. According to critical historians, the system change needed can only be brought about by a huge global social movement powerful enough to prevail against the corporate and political elites, who profit from the destruction of our planet.

The climate movement is already growing stronger every day. In 2014 it successfully organised the People´s Climate March, which became the biggest climate-related protest in history. 400 000 people marched in New York, and simultaneous actions took place in hundreds of cities worldwide. 2015 is a decisive year for the movement: from November 30th to December 12th, the United Nations Conference on Climate Change (COP 21) will take place in Paris. Its goal is for world leaders to sign a global treaty to curb carbon emissions. Unfortunately, everybody familiar with the record of these conventions knows that the results of COP 21 will not even get close to what we need to prevent runaway climate change from happening within this century.

With creative actions all around the globe and big marches in many cities*, the climate movement will use the media attention generated by the summit to promote real solutions for confronting the climate crisis. Our event will provide the audience with the latest effects of climate change, as well as details of upcoming actions and demonstrations. Our aim is to inspire the audience to join the growing climate justice movement and to help make a difference leading up to Paris and beyond.

„To change everything, we need everyone!“ - People´s Climate March

*Including in Graz on Saturday November 28th. More Info here.