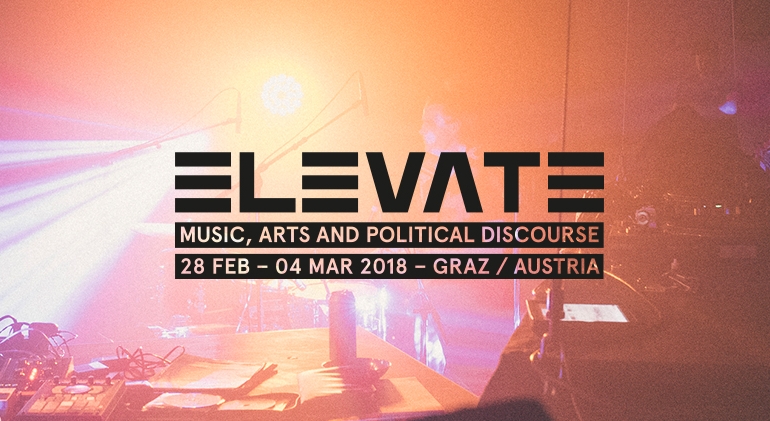 From February 28 to March 4, the multifaceted music, art and discourse programme will play out in and around the Schloßberg of Graz.

For the second consecutive time, Elevate will be heralding the arrival of spring. In 2018, the festival for contemporary music, arts and political discourse will go down in its new time slot in early March.

In 2018 the Elevate Festival will be focused on two fundamental terms of the modern age: risk and courage. Both stand for personal responsibility, progress and engagement. Courageous are those that boldly do good. Risk is an integral part of human life - it stems from unreason, but can also move mountains. How do both of these concepts relate to each other? What risks do human rights activists, journalists and whistleblowers all over the world take? In a time when humanity is fac with cataclysmic boiling points – from climate change to the decay of democracy and the rise of extremism – perhaps there is a need for more courage towards unconventional solutions? Or is a measured and centrist approach more effective?

Among the first confirmed speakers of this year's Elevate discourse programme is the controversially discussed Wikileaks activist Julian Assange, who will be speaking via live video stream from the Embassy of Ecuador in London, where he lives in political exile for more than five years. British journalist Sarah Harrison will speak on the sometimes life-threatening risks taken by whistleblowers as well as present the Courage Foundation, which has provided activists like Edward Snowden, Pussy Riot and Chelsea Manning with legal assistance. Civil rights lawyer Renata Avila will join us to shed light on the predicament of indigenous peoples in Guatemala. From Russia, but currently in Czech exile, the artist group Voina, whose members have been arrested several times for their provocative street performances, will perform and talk about their work during the festival. The work of Angela Richter also borders the line between art and political activism. She is a theatre director by trade and one of four resident directors at the Schauspielhaus Cologne, as well as a member of the pan-European democracy movement DiEM25, which was formed in 2016 as an initiative of the former Greek Minister of Finance Yanis Varoufakis.

Similarly, the 2018 music portion boasts a number of pioneers and trailblazers: John Maus, the existential philosopher among synth-poppers, will be presenting his long-awaited fourth album “Screen Memories” after a 6-year hiatus. The playfully acerbic end-of-days mood that the political science PhD composes with his homemade algorithms and analog modular synths, is staged live as a humorous and chaotic punk rock show – Elevate will be his only Austrian date. A rare stage experience!

Hailing from the United States, ghetto house pioneer DJ Deeon will be bringing the raw, sample-heavy Chicago tracks with which he propitiated house and hip hop culture on the Dancemania label back in the 90s. Also on their first Austria visit, we have a resident of The Bunker in New York Mike Servito as well as Emma Olson aka Umfang, who, as a co-founder of the Discwoman collective, has been fighting the still-to-be-widely-acknowledged exclusive male power in contemporary club culture with amorphous, polyrhythmic techno.

In a special new addition in 2018, none other than Ben Frost and MFO will be playing the Orpheum, performing with a corresponding AV liveshow. Ben Frost recently released his 5th studio album recorded with Steve Albini. In Graz, their show will mark the beginning of a new emphasis on multimedia in cooperation with the Dutch TodaysArt Festival under the umbrella of the We Are Europe festival cooperation, which will come to a close at the end of 2018 after its three-year run. An entirely new location will be inaugurated by the multi-instrumentalist and Efterklang collaborator Peter Broderick – one of the most prolific figures of the London-based avant garde label Erased Tapes will steep the venerably morbid aura of the Mausoleum of Graz in a meditative and ambient chamber music atmosphere.

A limited batch of the low pice, highly sought-after Early Bird tickets is available now for € 66,-