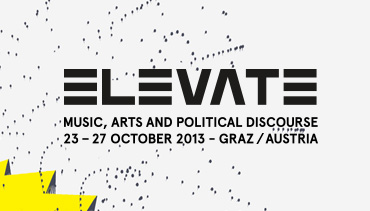 In less than three months time, Elevate will open its doors for what marks the festival’s ninth consecutive installation. Pushing things a little further, Elevate Festival announces the first details of the literary portion of the festival, as well as the new wave of acts.

The stage curated by Viennese beat-maestro Dorian Concept is complete. Alongside the man himself and his fantastic live show which will showcase his newest material, LA's Daedelus has been confirmed. The versatility of this ridiculously talented musician is easily demonstrable by way of his discography. EP’s and full-lengths on labels like Ninja Tune, Anticon, Plug Research, Brainfeeder and Stones Throw prove why Daedelus is regarded as one of the most unique electronic musicians around these days. Stones Throw is also the home of American multi-instrumentalist James Pants who will join forces with the illustrious composer, media artist and radio-play producer Felix Kubin to warp the boarders of the strange and the bizarre. The first fruit of this collaboration can be heard on the recently released Tanzen und Blitzen 7-inch, which came out via Apokalypso.
The very special announcement comes with Bibio being added to the line-up. A producer with vision and a highly demanded artist who just released his seventh album on Warp Recordings, Bibio will round out the evening with one of his rare DJ-sets.

Peverelist, one of the most influential DJs and producers hailing from the ever-prolific Bristol scene, will be coming to Graz for the first time ever. Aside from releasing on his own label Punch Drunk, he has also put out material on Hessle Audio, Skull Disco and Tectonic. „Psychedelic dance music for sound systems.”

Vakula will also be visiting Austria for the first time in what promises to be a tastefully varied journey between deep house and world music. This widely popular producer and DJ is probably the Ukraine’s hottest commodity right now.

Not too long ago, the French-born Christelle Gualdi aka Stellar OM Source left her mark by releasing Joy One Mile on Rving International. After exploring the synth-driven ambient realm, she will be bringing her cultivated new blend of old school techno to the dance floor.

Vienna's Ogris Debris are set for a number of appearances this year. In the wake of their DJ set at the Dimensions launch party in June, upcoming shows include the Elevate stage at Dimensions Festival in Pula and the Elevate Festival itself.

For the first time ever, one of the two afterhours is under the direction of the aspiring techno/house label Get The Curse from Paris. Clement Meyer & Tomas More will be hijacking the faders at the Parkhouse gradually turning late night into noon.

The format for word and sound will once again be provided by hoergeREDE who will be presenting contemporary literature, sound art, discourse and performance in cooperation with the Minoriten Cultural Centre. Over the course of four days, authors including Ann Cotten, Phil Minton and FALKNER will be showcasing a series of unique multimedia pieces produced in collaboration with musicians like bulbul, Electric Indigo and Dat Politics, specially commissioned for this occasion. Interventions, lectures and discussion forums illustrate the topical emphasis of this year’s macht hoch 2 theme.
For more info visit www.hoergerede.at

You also have the opportunity to support the festival as an Elevate Supporter and choose between two generous Supporter goodie packs as well as helping the festival maintain its high quality in the years to come. For more info visit: http://supporter.elevate.at