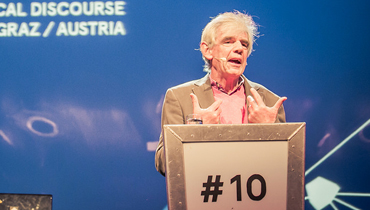 David Charles blogs about the events of the Elevate Festival, beginning with the opening speech by John Holloway.

'My opening speech has a title. The title is: Opening Speech.' John Holloway laughs with our laughter, stepping away from the Elevate podium and swiping at the air in front of him, as if he'd just thrown a frisbee. But the title is no whimsy.

Nor is his decision to speak in German. 'Mainly it's a protest against Englishification,' he explains. 'Not from a nationalistic point of view, but because of the social narrowness that is brought along with this Englishification.'

(Half a dozen sentences into the festival and already my spell-checker is choking on a new word. I love Elevate.)

Balancing the levity of the laughter, John justifies his carefully-chosen title: 'A speech that opens is just what we need in this world, a world that is closing.' He peers hopefully out at his three hundred friends in the Dom im Berg audience, out at his unknown audiences on Austrian national television, on the internet livestream and in smartphones hashtagging on international social networks. 'Maybe this is the speech that opens the festival that opens the world.'

For John, the cause of the closure is clear. 'A certain logic is being imposed on all aspects of life,' he says. 'The logic of money, the logic of profit, the logic of closure.'

'In the countryside, this logic tells us that you can't expect to live as your parents did, growing only the food that you need to survive. To survive under this new logic, you must farm mass production or you must make way for motorways, for dams, for mines. Or even better – why don't you just disappear altogether? Millions of people are forced off the land, to move into the world's slums.'

'If you do not want to follow the rule of money, if you want to do something else with your life, you are either mad or a criminal and should certainly be locked up. The dynamics of money are shattering the hopes and dreams of youth; dreams that are broken on the reality of unemployment. Or, often worse, the reality of employment!' The laughter this time is not warm, it is edged with cold reality.

John pivots his speech to optimism, inspired by the words of Ernst Bloch, the author of 'The Principle of Hope', a book written in exile from the despair of Nazi Germany. John argues, like Bloch, that our future depends on hope – not on a silly, blind hope that things will just “turn out right” – but a hope founded and grounded in practice.

In Bloch's day, hope was still tied to the Party, to winning control of the state. 'But now the party is over,' John says, waving encouragement to the flickers of laughter for his pun. The room catches and thrills with three hundred rhythmic clappings. He thanks us: 'After the depression, this is what I needed!' John laughs, before delivering more depression. 'Hope lies not in building a party, not in winning control of the state, because the state is an institution integrated into capitalism and cannot be used to overcome it.'

But if we have not Bloch's hope, what hope do we have? John essays an answer.

'We break away from the totality of capital death in a million different ways. We commonise. We force cracks in the system. We fight for our earth, the earth of people and other forms of life, before the capitalist system destroys it completely. We fight to open a gap between the future of capitalism, which can only be death, and the future of humanity, which can still be life.'

John takes a breath. Then adds, 'If it is not too late already.'

John quotes Arundhati Roy's beautiful expression of Bloch's same idea: “Another world is not only possible, she's on the way. On a quiet day, I can hear her breathing.”

'Thus, in my opening speech, I want to open this world. My wish for the festival is that it will be an Opening Festival. That it sings the songs of the world that has not been born yet, that it sings these songs as loudly and as beautifully as possible. Thank you.'

The rising of this opening audience to this opening speech for this opening festival gives me a sniff of optimism that Elevate 2014 will jam a rubber sole against the slamming doors, hurl a tonne of dynamite at the thickening walls and prise a common crowbar into the cracks of capitalism.

John Holloway is a Professor of Sociology at the Instituto de Ciencias Sociales y Humanidades in the Benemérita Universidad Autónoma de Puebla, Mexico. He has published widely on Marxist theory, on the Zapatista movement and on the new forms of anti-capitalist struggle.

David Charles is a writer from England. He will be blogging throughout Elevate 2014. He wrote a book on last year's Elevate, which you can get here.