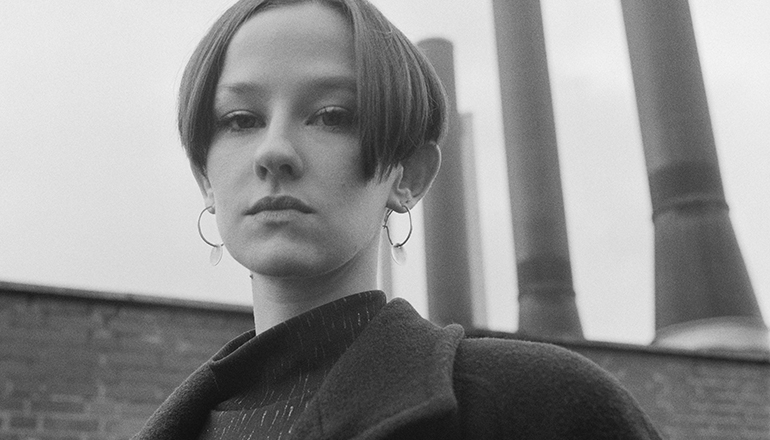 With her mesmerizingly beautiful sound pieces, Caterina Barbieri re-interprets the history of minimal music. In a short interview we ask the Italian-born composer about her fascination with modular synthesizers and her philosophical approach towards music, touching on questions of technology and the way it influences musical authorship.

Interview: Shilla Strelka
Also published in the new Elevate magazine out next week.

Shilla Strelka: You studied classical guitar and electro-acoustic composition in Bologna, went on a residency at EMS in Stockholm. It was there that you fell in love with the Buchla synthesizer. The possibiliy to generate soundwaves, to modulate them, puts you in a different position as a composer. It means going into the material of sound itself, opening up a different degree of creative freedom.

Caterina Barbieri: Yes, I would say that the experience with the Buchla really helped me to free my creative potential and it all happened very naturally. To me it really felt like a miracle. For the first time it wasn’t me playing the music but it was rather the music playing me. The control panel of the synthesizer acted as a portal of access to an hidden psychic potential. What a fantastic witchcraft!

Your sound is very elegant and reduced, reminiscent of Minimalists like Steve Reich and early electronic composers like Laurie Spiegel. Where you appealed by these methods of minimalist composition - polyrhythmic patterns and figures that are based on repetition and variation - before you started working with synthesizers?

Thanks. Yes I’ve always been interested in minimalist music and the listening experience of early minimalism for me was a bridge to get into electronic music. I still think that early minimalists were already doing electronic music without actually using electronic music machines. Like visionary heralds, they have predicted the music of the machines, by developing compositional methods later adopted by many different styles of electronic music, mostly based on the exploration of repetition and its psycho-physical effects (drone, techno, ambient etc.).
I think that the advent of electronic music machines only further developed and took to the extremes certain compositional implications already present in minimalist music aesthetics, which in turn is the result of a transcultural contamination of different music traditions, ranging from African polyrhythms to Hindustani philosophy of sound.
In my experience, the practice on synthesisers definitely contributed to shape my musical thought. I think that the design of a machine always affects the compositional design of the music. Machines create some sort of paths along which creativity moves and becomes - sort of spatiotemporal paths defined by the limitations and powers of the machines. In a Einsteinean way, I feel that machines curve the space-time of the composer’s brain, exactly like the mass of an object curves the space-time of other objects.
Think about how laptops opened up the possibility to work with super fast or super slow tempos, unfolding temporalities in music that were unimaginable before. For example with certain programming languages it is possible to generate a sound modulation that happens in the span of days, with changes in the sound material that are even beyond human perception!

In your presstext it says that you are "approaching music practice as an integrative cognitive feedback between humans and technology". What difference does it make to work with a vintage modular system in comparison to a plug-in on a computer that would simulate it?

It makes a big difference! It’s a quite complex phenomenon to explain and there are many aspects to take in account. In first place, vintage modular systems have this unrepeatable “aura” resulting from the peculiarities of their physical components and constructive design, including the instabilities, fragilities and unpredictability of their behaviours which make these instruments very unique and contribute to create the complex quality of their sound.
I think that the physicality of these instruments and the possibility to experience music through an active and continuous gestural activity is what makes the difference. These machines invite us to engage with sounds not only with our eyes but with our full body. This also means a less visually oriented design, and therefore a less horizontal-linear-narrative music temporality, which can be pretty liberating for many of us. Such a complex phenomenon like music cannot easily be reduced to be experienced through only one of the human senses - that’s why I feel that the more holistic, the more qualitative is the experience of music.I think that all these aspects together contribute to add a sense of verisimilitude to the act of making music with these instruments, which imperceptibly yet consistently define the complexity, richness and quality which music experience is made of.

Your arpeggios remind me of Bach as well. They are quite classical. At the same time they evoke associations of deconstructed Techno, maybe a slower, more melodic form of Mark Fell, that is still edgy though. It's as if you're travelling through time, infiltrating various languages. You have studied composition and just finished your thesis on Hindustani music and minimalism. Also when listening to your recent mix for NTS radio, it becomes clear that you draw your inspiration from all kinds of sources.

Thanks, I love both Bach and Mark Fell so that’s a very nice compliment!
Travelling through time and space in music is something I am doing more and more recently. And it’s very liberating! I am trying to bring together all my influences with little regard for temporal, spatial and stylistic barriers. For example I am going back to my teenage listening influences - a weird and apparently incompatible mix of baroque music, doom metal and shoegaze…So in my last mix for NTS I wanted to bring all these different music styles together in one single piece of music where I could outline a common invisible geometry connecting all these different kinds of music from west to east, from remote days till 2017.

You're part of the progressive music scene, still your musical confession to beauty, your believe in harmony and balanced composition is something that experimental music is often lacking. You state that you are interested in music as ways of meditation. Could you name a few artists that inspired you in this aspect?

I suppose you're working on a new record?

Yes, I am getting more and more busy with concerts and different projects so it’s hard to finalise the recordings and production of the new record but the music is there and more sooner than later I hope it’ll be ready to be shared in physical format!