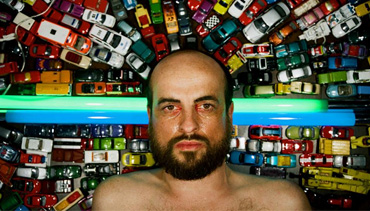 Electronic music, experimental sound art and world improvement – this unique European festival in Graz, Austria, is taking place for the 11th time this October. Lectures, discussion panels, film screenings and workshops during the day, award show, concerts, performances and DJ-lineups in the evening – this concept has established Elevate as one of the most influential forerunners for the synthesis of intelligent participation and progressive club culture.

We are very happy to welcome Matthew Herbert and his band to this year's Elevate Festival. On 25 October, he will close out the Music & Arts part of the festival alongside Jimi Tenor at the Orpheum Graz. There he will be presenting his brand new album „The Shakes“. As if that weren't grand enough, Dorian Concept is set to kick off the festivities on 22 October at Dom Im Berg, backed by his terrrific band consisting of Cid Rim and The Clonius.

The lineup is complete, here are the latest additions:

Herbert (UK) Jimi Tenor (FI) Bok Bok (UK) Dorian Concept ft. Cid Rim & The Clonious (AT) MikeQ (US) Rhythmic Theory (UK) Ventil (AT) Tara Transitory aka One Man Nation (SG) Fontarrian & Jupiter Live (AT) DJ Ripley (US) Eartheater (US) Moony Me (AT) Pure (AT) Solo Premium (AT) Ash My Love (AT) SEDVS (AT) Fam. Geschrey (AT) Bitz & Bogdo (AT) Liik (HR) Simon/off (AT) A:lex & Florian Scheibein (AT) other worlds (AT) Inou Ki Endo (AT) Adriana Celentana & Columbush (AT) Hedonismus Hacienda (AT) RiHi DJ Heroines of the Universe (AT)

Creative Response is not just the impulse that makes an artist create art, it is also alive within all of us, throughout history, embedded with compassion, our greatest human talent. It is the embrace of emotion and passion, bound together with thoughts and ideas, which operate in the free space between public and private, permitted and prohibited. Creative Response is about embracing imagination to see us connected as one people, which allows us to make everything possible.

The Elevate Festival aims to inspire people and engages in community-building for the growing social movements of our time. The program focuses on new forms of democracy, creative artistic support for migrants, convivial technology, ground-breaking innovations in agriculture and cutting-edge climate justice activism.

Collectively generated creativity, solidarity and courage are the quintessence of Creative Response. Elevate invites you to get active and to participate with the festival´s speakers and artists.

Free admission to all talks, discussions, workshops and film screenings!