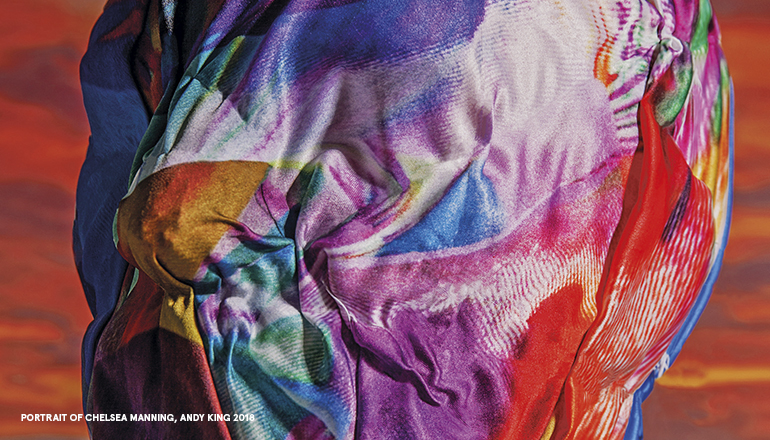 In 2018, the Elevate Festival will continue to expand its art program. Multimedia commissioned works by Adam Harvey, Andy King and LAb[au] can be seen during the festival. DEPART is showing its virtual reality installation "The Lacuna Shifts" in Graz for the first time.

Video art, multimedia art and text-based performances were part of the Elevate Festival right from the start. Since the new festival date in spring, exhibition of visual arts are playing an increasingly important role. In 2018 large-scale works can be visited during the entire festival. On view will be a portrait series of whistleblowers by the British media artist Andy King, which she is developing as the first Elevate artist-in-residence in Graz. US artist Adam Harvey is also producing a new work: "Machine Learning City" is the name given to his multimedia exploration of artificial intelligence and machine vision in urban space - to be seen in the esc medien kunst labor. In cooperation with Soundframe and the Diagonale, the Viennese artist duo DEPART is showing its impressive virtual reality installation "The Lacuna Shifts" in the Orpheum Extra. And at the Lendhotel, the Belgian group LAb[au] is building an installation called "OrigamiRhombi" – a sensual study of color, movement and light. To be seen in the foyer of the Lendhotel from the 4th of march 2018.

A key driver for this is the Europe-wide production and presentation platform "Re-Imagine Europe", which has been set up since 2014 by one of the largest cultural centers in Europe, the Paradiso Amsterdam, together with Elevate and other cultural institutions. From 2018 to 2021, more than 10 art-organisations join forces, focusing on interdisciplinary commissioned works. An own "artist-in-residency" provides artists from different countries with space for common work processes. The results are presented in different places in Europe and related to a common narratives. Among the participating organizations, apart from Elevate and Paradiso Amsterdam, there are such evocative names as the Lighthouse Studio in Brighton, the Sonic Acts Festival and the Norwegian Museum Bergen's Kunstforening. The project is made possible by the European Union's Creative Europe Culture Program.

One of the projects of the upcoming festival edition will be produced by Berlin-based media artist Adam Harvey, from the United States. Harvey has been researching the social impact of networked data analysis technologies for years. He focuses on digital imaging technologies such as those used in surveillance cameras with face recognition. In Graz, he realized the project "Machine Learning City", which deals with the issue surrounding the right to one's own image in the context of urban discourses such as surveillance, public space, and digitization. For the Elevate Festival, he conceived an interactive multimedia exhibition related to Graz, which will be on display at the ESC Media Art Lab from 1 March to 9 March. The opening will take place on 1 March at 6 pm. In addition, there will be a lecture on 3 March at 6 pm with a subsequent Q&A on the topic.

A second project within the framework of Elevate Arts 2018 is being developed as part of an artist residency, for which the British media artist Andy King was invited to Graz. In her mostly political and often ironic works, the young artist frequently deals with themes of the digital age. For Elevate, she created a series of photographed portraits of whistleblowers that were alienated beyond recognition using various digital glitch techniques. The idea behind this is to trace the character of the whistleblower: as an uncoverer and revolutionary, as a security risk and a traitor, as a martyr in the fight against abuse of power - in any case as a disruptive factor within perfectly established systems of state secrecy. Whistleblowing requires courage and a willingness to take risks, for the consequences of such a disruption are wildly unpredictable. In the series "System Error" the fundamental functions of whistleblowers are translated into a visual language. Some of the portrayed persons themselves will be guesting on the Elevate discourse programme, including Thomas Drake, and Jesselyn Radack. The series will be shown in the tunnels of the Grazean Schlossberg from 28 February until 6 March.

The work of the Belgian artist group LAb[au] points in a completely different direction. They produce a new commissioned work. Founded in Brussels in 1997, their art has made a name for itself internationally. A long list of exhibitions - including the Seoul Museum of Art, the Biennale di Venezia and the MOMA New York - underline this impressively. In their multi-dimensional installations, they mostly work on the frontiers of architecture and digital technologies. Their concern: Questioning contemporary aesthetics and semiotics using algorithmic, conceptual thinking by means of geometry, color, light and movement. With the commissioned work "OrigamiRhombi" they deliver the first result of the new cooperation between the Elevate Festival and the Marko Hotels  (Schlossberghotel, Augartenhotel und Lendhotel). The purchase will be included in the extensive collection of the hotels. It can be visited from 04th of march in the foyer of the Lendhotel Graz.

Another opening will take place at this year's Elevate Festival: The virtual-reality-installation “The Lacuna Shifts” by the Austrian artist duo “depart”. The work commissioned by Soundframe and the Linz based OK-Center leads the visitor into a parallel world of digital architecture, sound art and literary cross-references. Voices from the off read poetic miniatures by Ogris Debris-musician Gregor Ladenhauf, which are mixed with text fragments from Lewis Carroll's “Alice’s Adventures in Wonderland”. Ladenhauf also produced the acoustic translation of the surreal landscape designed by his colleague Leonhard Lass. The work, which deals with deceptive perceptions as well as the fusion of consciousness and virtuality, will be realized in cooperation with the Diagonale Festival. The opening takes place during the opening ceremony of the Elevate festival on the 28th of February.