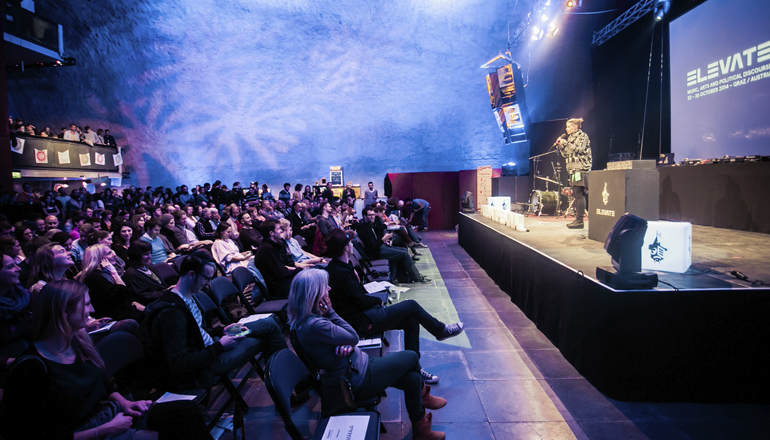 The Elevate Festival heralds the beginning of spring for the second time. Three new stages, an extensive programme of discourse and an increasing number of formats for the visual arts will send the festival to the future starting with this new date.

Festival opening for the first time in Orpheum
About a week from now, Elevate Festival will open its doors again, this time at Graz's Orpheum for the first time ever. Highlights of the opening show on Wednesday, February 28, 2018, are a speech by the cartoonist Gerhard Haderer and a live broadcast with Julian Assange from the Ecuadorian Embassy. Just last week, a British judge decided to continue the arrest warrant for Assange. Sweden had closed the case in May last year. It's still unclear when Assange will leave the embassy. At the opening of the festival he will present his perspective. Subsequently, questions from the audience are collected, also to account for the controversy surrounding Wikileaks and his person. In addition to many other guests from the discourse, program designers give a taste of the events of the coming days. Austrian President Alexander van der Bellen sends a video-statement.
Jorge Sanchez-Chiong contributes sounds together with drummer Lukas Koenig. B. Fleischmann will perform his new album "Stop Making Fans" live with his band. Also a highlight of the music program: The electro duo Waelder with its organically animated sound worlds of ambient folk, post-dubstep and lo-fi pop. Elevate Arts will open the virtual reality installation "The Lacuna Shifts" by DEPART, making its Graz debut in cooperation with Diagonale. And for those, who wanna dance through the night, F. Puschmann will perform one of his famous sets.

Music program 2018: New stages and formats
The music program of the following days is all about new stages this year: Open air at the top of the Schlossberg, AV live shows at the Orpheum and avant-garde in the Mausoleum. The style icons DJ Koze, Roman Flügel and Steffi will have themselves a little techno summit on the new daytime open-air stage at Schlossberg. Portishead accordionist Mario Batkovic and multi-instrumentalist Peter Broderick will immerse the venerable baroque halls of the mausoleum in a meditative ambience. At the Orpheum, concerts at the intersection of sound art and media art are the focal point: Ben Frost's physical drone sets meet light sculptures by Marcel Weber aka. MFO. With his light-flooded sound pieces, sound art pioneer Fennesz will demonstrate why he is one of the most innovative guitarists of his time - visualized by film theorist and media artist Lillevan. There are tons of other things to discover: John Maus, the philosopher of existence among synth pop figures, presents his long-awaited fourth album "Screen Memories" after a hiatus of six years. Making her Austrian debut, we have Emma Olson aka Umfang. As a co-founder of the Discwoman collective,  she aims to fight the male dominance in contemporary club culture with polyrhythmic techno. Queer rap from New York is provided by Cakes da Killa, Kendrick Lamar producer Nosaj Thing will play with his laser show at Dom im Berg. Unbridled party euphoria is taken care of by Jackmaster and his label colleagues at Numbers Label-Night. Local musicians are also strongly represented: In addition to Fennesz's appearance, B. Fleischmann presents his new album "Stop Making Fans" live for the first time with a backing band. German rap innovator Wandl fires melancholic bass waves over Graz and Waelder will showcase their organically animated combinations of ambient folk, post-dubstep, and lo-fi pop.

Discourse Programme 2018: Risk/Courage
This year's discourse programme is dominated by two basic concepts of modernity - risk and courage.Both terms stand for personal responsibility, progress, and commitment. Both are vehicles of social change. A large number of modern achievements - civil rights, freedom of the press, democracy - are the result of courageous struggles. However, while we often accept great risks in technological and economic developments, current crises like authoritarian tendencies in politics, rising social inequality, and climate change often lack courageous endeavors with sizeable impact.

International guests from politics, journalism, art, and science will discuss what can and must be done. The human rights lawyer Renata Avila and Tara Houska will talk about the front lines of climate change and the situation of indigenous peoples in the USA, Honduras, Guatemala, Brazil, and Kenya. Among others, Suhrkamp author Raul Zelik and sociologist Andrea Kretschmann from the Franco-German "Marc Bloch Research Center" will discuss the criminalization of protest and the reduction of democratic achievements. Human rights activist Mahsa Ghafari and Femen founder Oksana Shachko negotiate feminist issues. A panel discussion on "Fearless Journalism" with war photographer and filmmaker Kate Brooks, ARD journalist John Goetz and investigative journalist Julia Herrnböck from the dossier is also eagerly awaited. This session will be moderated by Sarah Harrison, director of the Courage Foundation and former Wikileaks editor. On the tail end of the festival on Sunday evening, the audience can look forward to a unique guest list of US-American whistleblowers. Among them one of Snowden's lawyers Jesselyn Radack as well as Thomas Drake, Lisa Ling, and many others. Whistleblower legend Daniel Ellsberg will also be sending a video statement on this subject.

Elevate Arts - Media Art, Artist-Residence, and Space Installations
2018 continues the idea of displaying extensive works that can be visited throughout the festival. Among many others, a series of portraits of whistleblowers by the British media artist Andy King can be seen, which she developed as the first Elevate Artist-in-Residence in Graz. The US artist Adam Harvey is also producing a new work: "Machine Learning City" is the name of his multimedia exploration of artificial intelligence in public space. In cooperation with Soundframe and Diagonale, the Viennese artist duo DEPART is showing its immersive virtual reality installation "The Lacuna Shifts" at Orpheum Extra. And in the Lendhotel, the Belgian group LAb[au] is building an installation called "OrigamiRhombi"; a sensual study of colour, movement, and light.