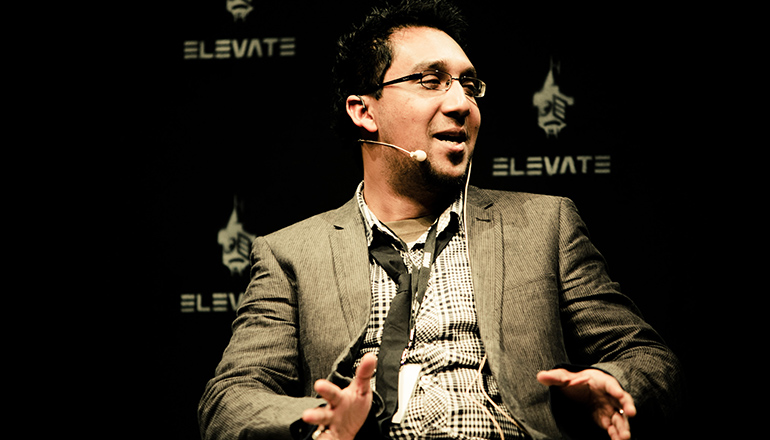 The Elevate Festival asks its guests to comment on this years' topic as well as the multiple converging crisis. Nafeez Mosaddeq Ahmed will talk about "Great Transformations" on Thursday at the Festival.

Nafeez Mosaddeq Ahmed is an international security analyst and bestselling author. He is Executive Director of the Institute for Policy Research & Development in London, a transdisciplinary research network for equality, sustainability and security. He has also taught at the School of Global Studies, University of Sussex, and lectured at Brunel University’s Politics & History Unit.

On Thursday at 18:30 he will talk about "Great Transformations" in Forum Stadtpark.

What's your take on the current multiple crisis (economic, ecological, social, political) and the (anti)crisis politics?

We are currently facing an unprecedented convergence of global climate, energy, food, water, economic, social, psychological and political crises. Unfortunately, our conventional epistemological approaches, which are reductionist and fragmentary, tend to view these crises in isolation, failing to comprehend their inherent systemic interconnections. But these are not separate crises. They are interconnected symptoms of a global Crisis of Civilization.

So how can we respond? We must first awaken to the reality that this is not the end, but the beginning. We are witnessing the collapse of the old paradigm, which hell-bent on planetary suicide, isn't working. By the end of this century, whatever happens, civilization in its current form will not exist. The question we must therefore ask ourselves is this. What will we choose to take its place?

As a species, we are on the cusp of an evolutionary choice. Standing at the dawn of this perfect storm, we find ourselves at the beginning of a process of civilizational transition. As the old paradigm dies, a new paradigm is born. And many people around the world are already making the evolutionary choice to step away from the old, and embrace the new.

The new paradigm, although it remains nascent and is emerging disparately in different parts of the world, consists of a combination of key alternative structures: distributed clean energy production, decentralised organic farming, participatory economic cooperation, to name a few: offering a model of development free from the imperative of endless growth for its own sake; and leading us directly to a new model of democracy, based not on large-scale, hierarchical-control, but on the wholesale decentralisation of power, towards smaller, local ownership and decision-making; yet joined-up globaly through locally-managed information technology networks.

The new paradigm is premised on a fundamentally different ethos, in which we see ourselves not as disconnected, competing units fixated on maximising consumerist conquest over one another; but as interdependent members of a single human family. Our economies, rather than being assumed to exist in a vacuum of unlimited material expansion, are seen as embedded in wider society, such that economic activity for its own sake is recognised as the pathology that it is. Instead, economic enterprise becomes aligned with the deeper values that make us human - values like meeting our basic needs, education and discovery, arts and culture, sharing and giving: the values which psychologists say contribute to well-being and happiness, far more than mere money and things. And in turn, our societies are seen not as autonomous entities to which the whole of the planet must be ruthlessly subjugated, but rather as inherently embedded in the natural environment.

People are increasingly disenchanted with prevailing socio-political and economic structures, and they are hungry for alternatives. Yet they see none readily available, no existing mechanism which allows their voices to be truly heard – what left to do, then, beyond simply occupying public space in an effort to, somehow, reclaim power?

The Arab Spring in the Middle East and the Occupy Movement across the West are, in this context, populist outbursts of resistance against planetary-level human suicide; the beginnings of the death-throes of an overarching civilizational form that is simply not working. The very nature of our civilization – given its accelerating trajectory toward ecological and economic self-destruction – is now in question; its ideology of nature and life, its value system, and how these are inherently linked to its socio-political, economic and cultural forms.

For the first time in human history, we face a civilizational crisis of truly planetary proportions. With it we are witnessing the self-destruction and decline of an exploitative, regressive and harmful industrial civilizational form within the next few decades, and certainly well within this century. With all this, we have an unprecedented historic opportunity, as this regressive civilizational form undergoes its protracted collapse, to push for alternative ways of living, doing and being – economically, politically, culturally, ethically, even spiritually – which are potentially far more conducive to human prosperity and well-being than hitherto imaginable.

That can only be done if we galvanise the energy and excitement of the Occupy Movement to develop firstly, coherent critical diagnoses of the true nature of the problem; and on that basis, coherent alternative frameworks of action. We need to work concertedly to demonstrate the efficacy and superiority of alternative social, political, economic, cultural, and ethical models of life. Not only do we need to develop our thinking and action on this, we need to develop innovative ways to show-case these ideas, to popularise them, and to educate communities and institutions. Most critically, we need to explore how communities, particularly those who are most marginalised and disenfranchised, can act on these models now, to begin creating real change at the grassroots, from the ground up. How can we work together to develop more participatory forms of economic exchange? How can we pool local and community resources to become more resilient to energy shocks – by becoming more self-sufficient in decentralized renewable energy production? How can we learn new skills so that we can grow our own food and be less dependent on the unequal and temperamental international networks of industrial agribusiness? How can we build new community-level political and cultural structures that render top-down state-military structures increasingly irrelevant?

Taking to the streets and occupying public spaces are important seeds of direct action, but from them should blossom the models of social transformation and empowerment that the 99 per cent can begin exploring, in open dialogue with one another, and even with the 1 per cent whose monopolies we are protesting. For it is imperative to ensure that these popular energies develop accurate diagnoses of our predicament, so that our activism can be pointed in the right direction – not just at the 1 per cent, but at the wider political, economic, ideological and ethical system which enables their very existence, and which thus empowers the dysfunctional pathway on which we’re currently heading.

What's your take on the central question related to this year's festival topic "Elevate the Apocalypse?": Will humanity succeed in creating an economic system and a lifestyle based on justice, solidarity and respect for the planet's ecological limits? Or will it take big disasters before people start acting decisively?

(Having in mind, that the Universal Declaration of Human Rights was established in 1948, after the utmost horrors of the second world war. Or also: Fukushima 2011. After that Japan makes a policy shift towards renewable energy use, turning off all nuclear reactors. Germany re-enters the nuclear exit strategy.)

While at first glance, this self-defeating trajectory of increasing centralisation of state and corporate power in the face of crisis convergence appears overwhelming, it is in the inherent faultlines of this process that opportunities for transformative resistance not only remain, but will widen as the acceleration of crisis in itself weakens the capacity of the system to sustain itself.

The political scientist Professor Thomas Homer-Dixon, one of the few scholars like myself who've undertaken a holistic, systemic appraisal of our civilizational predicament, points out:

"Conventional economics is the dominant rationalization of today's world order. As we've overextended the growth phase of our global adaptive cycle, this rationalization has become relentlessly more complex and rigid and progressively less tenable. Breakdown will, all at once, discredit this rationalization and create intellectual space for new ideas to flourish. But this space will be brutally competitive. We can boost the chances that humane alternatives will thrive by working them out in detail and disseminating them as widely as possible beforehand."

This dynamic - mirroring the life-cycle of natural systems - is a form of "categenesis", constituting "the creative renewal of our technologies, institutions, and societies in the aftermath of breakdown." As the old system increasingly fails, new ideas, technologies and social realities, previously unthinkable, now become possible. To some extent, then, breakdown, is necessary for renewal. Categenesis cannot follow except in the wake of collapse.

That is not to laud 'collapse' in itself for its own sake; nor to presume that deliberately accelerating collapse by itself would contribute to renewal. On the contrary, collapse in istelf does NOT necessitate categenesis - far from it; which is why we must be very cautious about those who advocate "bringing the system down" through force which, in itself, would not guarantee renewal, and in fact might well pave the way for alternative dysfunctional systems of violence to emerge instead. In other words, the outcome could go either way, extremely negatively, or positively, depending on the way in which we prevent, mitigate, adapt to and respond transformatively to the Crisis of Civilization.

As the infrastructure of industrial civilisation faces increasing shocks from the convergence of multiple global crises, so does the possibility for catagenesis through the new paradigm. The emergence of Occupy is a symptom of this process, and a sign of the immense potential that exists for renewal, but it must be galvanised in the right direction. We are witnessing the widening of possibility even now, as increasing systemic failures continue to accelerate widespread public disillusionment with prevailing policies - the challenge is to channel that sense of disillusionment into a coherent programme of collaborative, grassroots transformative action. The imperative, therefore, is to focus our efforts on catalysing the emergence of the new paradigm, raising consciousness, implementing, consolidating and spreading alternative social, political, economic and cultural models.