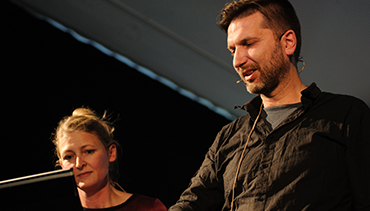 David Charles blogs about the events of the Elevate Festival. This is his review on the discussion "Konvivialität und Datenpolitik" on the 23rd of October in Forum Stadtpark.

“Are you a robot?” says the disembodied telephone voice. “You sound so much like a robot. Will you say 'I am not a robot?'”

So begins a presentation from Marek Tuszynski and Stephanie Hankey from Tactical Tech, a presentation that lurches easily from the surreal to the terrifying, but ends with a full bodied embrace of evil.

The central question Tactical Tech pose is: what does it mean to live in a data-ised society, for individual and for corporations?

The luckless telemarketer on the end of the disembodied question refuses to confirm that she is not a robot. That's the point: when we've automated ourselves to the eyeballs with algorithms, how do we still know that we are not being controlled by robots?

Balthasar Glattli, a Swiss national councillor, gave away his smartphone data so that everyone who had voted for him could see exactly what he was doing. From the data that leaked freely from the phone, analysts were easily able to track where he was, who he was talking to and what he was likely to be doing. Over time, it was simplicity itself to build up a network map of all his friends and colleagues.

Marek makes the point again: This is not a hacked phone. This is information that you all have agreed to share with the network provider - and with anyone else who buys that data. “Data is not a carrot,” Marek helpfully points out. “You can't eat it and it's gone.”

And if you're thinking that “vintage” phones are the answer, Marek will swiftly disabuse you of the notion. Non-smart phones still broadcast meta data – location, movement, times, connections – from which you can build up a very detailed profile of a user. Marek shows us a tool called Trackography, which shows tracking data for media websites all over the world. Every time you browse for your daily news, you are inadvertently sending data to third parties all over the world. Some of these companies you already know, like Google, Amazon or Facebook; but some are completely masked and anonymous.

Marek shows us what happens when we browse through 7 local and national Austrian media sources: Trackography counts 95 unintended connections with institutions all over the world, curious about your clicking behaviour.

Next, Stephanie Hankey introduces us to the marketing concepts of geo-targeting, geo-fencing and geo-conquesting. Geo-targeting is pushing people content based on their location. Geo-fencing is about marking out 100m² areas and targeting adverts at people who are in those areas right now, or who have been there within the last 30 days, say. Geo-conquesting takes it to a new level. This is when a company can see when you're on a competitor's territory and pushes you an advert to attempt to lure you away.

Stephanie herself was a victim of geo-conquest just yesterday. As she arrived at Frankfurt airport, she was pushed an ad by Easyjet, innocently asking if she wanted to buy a flight. Easyjet don't operate from Frankfurt, but they knew she was there and they knew she hadn't flown with them. But, as Stephanie says, “Paranoid is okay, paranoid is good.”

Furthermore, while older tech companies do have a slightly different business model – Apple and Microsoft also make money from selling soft and hardware – as data reaches further into our lives, more and more companies are joining the data model, including the car industry, to take one notorious recent example.

But Stephanie and Marek aren't here only to terrify people with the reach of data into our lives. They are also here to encourage us to take control back from the algorithms.

Life insurance companies have started giving customers a discount for wearing a device that tracks your physical activity. The discount is worth about €50 per year. These devices track your geo-location, of course, but also your exertion. Using those two data streams, it is easy to tell, just for example, who is having sex, with whom and how much they're both enjoying it. Is that worth €50?

But why not take the €50 discount and subvert the business model: fix your device to a metronome, to the wheels of a taxi cab, on the end of a drill or to your dog's collar.

These comedy subversions belie serious questions, like what constitutes political autonomy in the quantified society? Stephanie questions whether “Big Brother” is even the right metaphor. “Big Mama” might be better; these data-driven surveillance intrusions seem utterly banal, rather than sinister.

Churchix, for example, is a surveillance tool that uses facial recognition software to track which of your flock regularly attends your mass. How do these things become normal, even for a church? Even if Churchix doesn't take off, how did it come to pass that someone thought this was a good idea?

Corporations have been leading the way, of course. Mark Zuckerberg, founder of Facebook, has spent $14m buying the 3 houses around his property so that he would have no neighbours. Contrast that personal decision with Facebook's real name policy and business model that encourages us to make the private public. And let's not forget that it's a business model that made a $3bn profit last year, paid UK staff bonuses of £35.4m, yet only £4,327 in UK tax.

According to Stephanie, these huge data corporations are going around government. They see themselves are being “uber government” and it seems unlikely that they will be pulled into check now.

Microsoft have developed a chip the size of Scrabble tile that can be implanted into women and control their fertility. Calico are in the business of “radical life extension”, curing death. Google are building a space rocket so they can mine the moon.

Marek ends with a provocation to action: How can we counter the creativeness of these uncompanies?

Tactical Tech have a number of projects to help people answer this question: