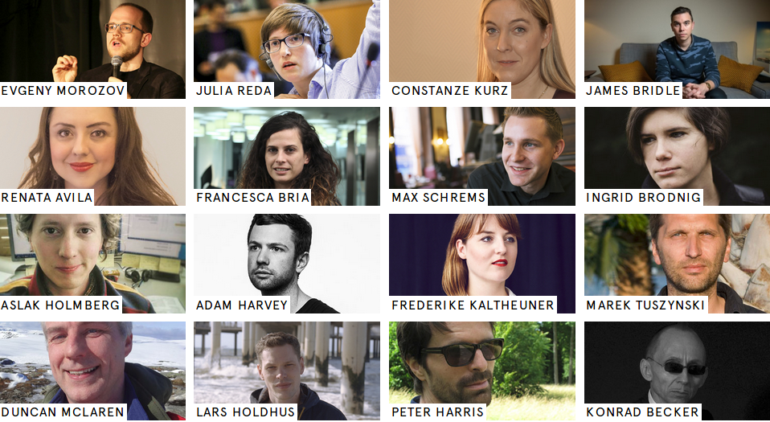 The full schedule of the discourse programme, as well as all artists and the complete music lineup is now available online. Click here for some highlights of the programme..

Big Data, Quantification and Algorithms are the central topics of the 2017 Elevate Festival. Total surveillance, enormous data collection by corporations and secret services, as well at the current issues around “fake news” are being talked about in the mainstream discourse but a fundamental discussion about technological implications and the ethical issues that arise when dealing with the use of algorithms and the power structures connected to it, is yet to be had. Elevate Festival will address these very points and intends to shine a light on a wide array of topics which will be accompanied by panel debates, inviting a number of contemporary artists to contribute as well.

Select sessions will again be co-curated by this year’s guests as a part of the continental festival cooperation “We Are Europe”. Sónar Festival from Barcelona have put together a panel discussion named “From Smart Cities to a City of the Commons” and Insomnia Festival from Tromsø, Norway will offer a view on the Quantification of Nature, ongoing climate change and resulting confrontations with indigenous peoples. Top notch guests from Barcelona and Tromsø will make their debut trips to Graz.

The opening ceremony on 1 March will include a preview segment of the upcoming events during which numerous international guests will provide further insight into the sessions ahead. Evgeny Morozov will do the honors of giving the opening speech and a series of art performances will close the ceremony out. Thursday through Friday the programme is well-stocked with lectures, open forums, workshops and screenings of documentary films.

Thursday, 02 March
9 short presentations by internationally acclaimed lecturers on the topics of algorithms, big data and quantification - 1pm at Forum Stadtpark. In the evening: discussion revolving around smart city/sharing city in cooperation with Sónar.

Friday, 03 March
Keynote by European parliamentarian Julia Reda followed by two panel discussions on Ethics and Algorithms, the future role of culture in urban areas as well as the discussion on Quantification of Nature in cooperation with Insomnia Festival.

Saturday, 04 March
Algorithms and Self-empowerment: Workshops and a guided tour of the city dealing with the subject of algorithms the public space, installation openings and a panel discussion with selected artists. In the evening: screening of “A Good American” a movie by Fritz Moser who will be in attendance.

Sunday, 05 March
Discussions concerning the relationship between Media and Algorithms as well as the topic of Hacking and Data Leaks. In the evening: a film about women in the IT and coding scene.

International Guests with an emphasis on the contribution of artists

The guest list for the discourse portion of the festival is studded with internationally acclaimed players of all fields: best-selling author Evgeny Morozov; the Human Rights Advocate and Internet activist Renata Avila; Francesca Bria who is responsible for the Innovation and Technology Department in the municipal government of Barcelona; Julia Reda is a Pirate Party delegate to the European Parliament; James Bridle, Adam Harvey and Lars Holdhus, three internationally known artists; Constanze Kurz is the spokeswoman of the legendary Chaos Computer Club in Germany; Aslak Holmberg is a member of the Saami-Parliament in Finland and is internationally active at the UN for the rights of indigenous peoples; Ingrid Brodnig, and Frederike Kaltheuner are internationally sought-after experts on media and technology; Max Schrems sued Facebook and with his actions laid out a new jurisdiction for the data transfer with the United States.

For the first time ever, there will be installations that can be seen beyond the festival’s 5-day stand:

From 4 March to 10 March, the video installation Painted by Numbers by Konrad Becker (AT) & Felix Stadler (CH) will be projected in the Gothic Halls of the City Of Graz (right by the Museum of Graz). Speculative Capital (Institute of Human Obsolescence) by Manuel Beltrán (ES) will be at the ESC Media Art Laboratory and Drone Shadow, a piece by James Bridle (UK) will be in the public space.