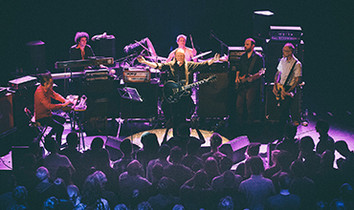 As a part of “We Are Europe” and as a counter-mechanism to the crises currently transpiring across Europe, the focus this year was strongly set on European politics. The opening ceremony started off with a welcoming of our guests and fellow We Are Europe partners from Belgrade, Cologne and Lyon. The show went on to invite inspiring discourse guests to say a few words. Wikileaks worker Sarah Harrison couldn't attend the festivities but we were able to have her join in via live stream and provide some insight into current events surrounding Wikileaks. Srećko Horvat then proceeded to make a compelling case regarding the future of Europe.

Then, the film “Tunisia Clash” by Hind Meddeb was screened, a movie that deals with five Tunisian rappers who have been incarcerated and sentenced because of their government-critical lyrics.