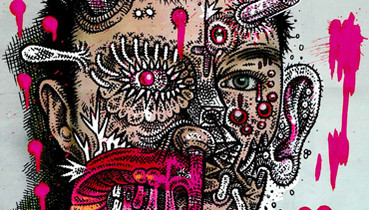 The catchy names of the artists scheduled to perform on this night might mask the fact that they have been navigating the murky fringes of several different genres, rather than moving forward into the spotlight, for quite some time.

Interestingly enough, they all put out their debut releases roughly a decade ago and it was merely Shakleton who had made a name for himself on Skull Disco Records at the time. Musically speaking, it’s safe to say that the subject matter was that of dark times fraught with division and contradictions. Contradictions like dub techno for example, which gradually became a point of reference on the one hand and a type of negative father figure on the other, when it became a collection of dusty musical blueprints. With that in mind, Let’s kill daddy!

Topping the bill we have Dave Huismans aka A Made Up Sound, who utilised the last ten years to work his way up to being one of the most sturdy ambassadors of techno-esque 2-step and broken techno. While his debut 2562 (his former ZIP code in The Hague) forced breakbeats into the dubstep context, it was his alter-ego A Made Up Sound that took over the abrasive and more straight-forward side of his work from the beginning. The last ten years produced four remarkable albums on which Huisman managed to carry the energy and ease of his singles over to the long playing format, without losing any of the quirkiness. Upon revisiting these albums, it is still apparent how full of fascinating musical ideas and surprises this work is. It will be very interesting to watch how these pieces translate in a live setting.

It is damn near impossible to reduce Sam Shackleton’s work to a single genre. While his early Skull Disco releases are praised as proto-dubstep, his more recent “Three EPs” on Perlon Records firmly situate him in the techno realm. However, his peculiar collaborations with spoken word artists like Ernesto Tomasini or Vengeance Tenfold have finally pushed the Berlin-based Brit past the borders of classification. Shakleton’s pieces combine multi-layered rhythmic structures and psychedelically meandering bass lines with apocalyptic atmospheres which give his work a disturbing but simultaneously driving character.

When Ancient Methods first popped up on the scene in 2007, Michael Wollenhaupt and Conrad Protzmann, the duo from Berlin, moved into a field that was loosely referred to as broken techno. The term is to be interpreted quite literally, as it expresses a disorientation that riddled the scene after minimal techno had inevitably been flogged to death. Ancient Methods recognised this departure rather early, not lastly since the name is a reference to techno’s infant years. By now, Protzmann has left the project and Michael Wollenhaupt is currently focusing more intently on a new wave and industrial-influenced sound which will probably make up most of his DJ set.

Jung an Tagen is comparably Stefan Kushima’s most accessible project to date. Kushima’s experimental sound works are usually featured in art contexts and his latest album “Das Fest der Reichen” (The Feast of the Rich, Editions Mego 2016) is finally gaining him the notoriety in his home country that he has been enjoying internationally for quite a while now. His abstract techno sketches somehow manage to straddle danceability without really providing much of a beat. For his live sets, he constructs his own temporary universe out of digital sound design and trippy afterhours chords for himself and his audience to inhabit while unapologetically celebrating dance music.

Unbeknownst to most people locally, Rer Repeter’s hypnotically off-kilter dub variations have helped make a name for himself from Bristol all the way to the west coast of the United States. His mixtapes for the Portland-based label PDXINDUBTING! combine forgotten dub anthems with slowed down techno edits while his own sounds are treated with all sorts of utensils (including but not limited to a cheese slicer, as one attentive critic one picked up on).