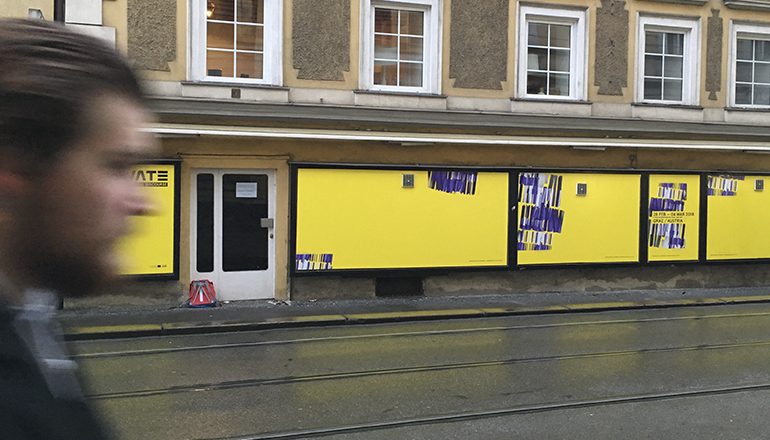 In almost every district of the city of Graz you can find vacant buildings: Abandoned shops, business premises, empty factory halls and fallow land. Between former and future use usually several months pass. Buildings that used to be busy find themselves left unused for months or years. In expensive locations vacancies are often consciously held in abeyance. Private real estate speculation easily overrules the public interests of urban planning processes. In recent years many cities started initiatives to turn empty vacancies into creative spaces for various kinds of temporary use. Private associations, initiatives of engaged citizens or municipal projects connect room seekers with real estate owners who want to have their space used meaningfully. Successful examples show that great synergies can be released by coordinated cooperation amongst citizens. Exhibition spaces for visual artists emerge, pop-up stores exhibit the works of young fashion labels or designers. Photo studios, rehearsal rooms for theater and co-working spaces are other popular usages that draw on their full potential in vacancies. In Graz, the “Raumbasis” helps to fill up vacancies since mid-2016.

Vacancy at the Elevate: Window design by Mimu Merz
Raumbasis-founder Anna Resch already participated in a panel discussion at the Elevate last year on the role of culture in the city of tomorrow. This year again, Resch actively supports an Elevate project. Together with the festival team and the visual artist Mimu Merz vacant business premises could be addressed. Their empty shopping windows are now designed with graphics by the artist, visible in public space from 07th of February until 07th of March 2018. For several years, Mimu Merz has been responsible for the visual design of the Elevate festival. She usually designs large-format graphics, conveying the content of the annually changing festival themes. As graphical interventions in public space, her visualizations are now also to be seen in places that would otherwise be empty. In places where only peeling plaster or wood-nailed barriers remind of formerly inviting shop windows, now colored markers point out the potential of temporary use. In the upcoming years, Elevate tries to expand the use of vacancies all over Graz. When the time comes, you will find all relevant information here.

For this year we say thank you for the spaces we could use!


Vacancies that Elevate 2018 was allowed to use: