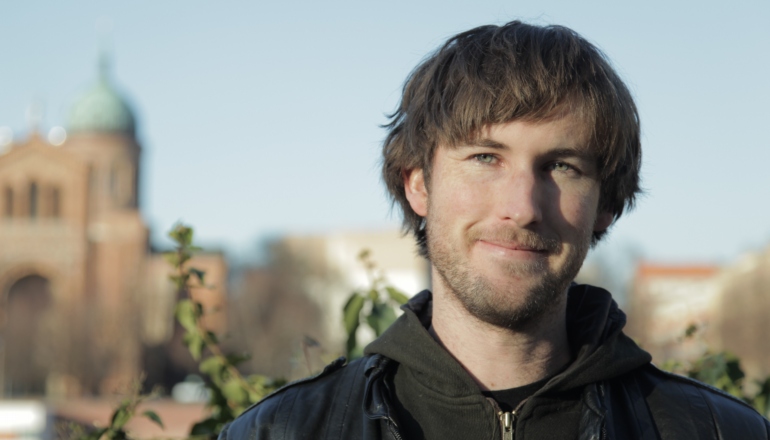 The OuiShare Fest was the first major European event dedicated to the collaborative economy. The three-day festival brought together a global community of entrepreneurs, designers, makers, economists, investors, politicians and citizens to build a collaborative future. Sam Muirhead is one of them. The filmmaker from New Zealand is based in Berlin and held a keynote on his project "Year of Open Source". It is a year-long investigative process and life experiment of using and creating only Open Source solutions for every aspect of life, not only in software, documented in videos and writing.

Year of Open Source from Sam Muirhead on Vimeo.

How would you describe the collaborative economy? Do you believe in it as a major future societal model?

In many cases it is simply more efficient to divide the use of resources and products amongst many people rather than have an exclusive ownership model, and this often creates a great side-effect of highly rewarding, and enjoyable interactions with others. I think the collaborative economy is wonderful, despite its severe buzzword affliction. The idea certainly has its limits, though: Did you know you only use your toothbrush for 9 minutes per day? 'OurBrush' unlocks the hidden economic and environmental benefits of your toothbrush through sharing in your local community.

We're slowly starting to work out which areas are suitable for this approach, and which ones are not so practical. Foodsharing.de is a good example of a great idea in theory  which doesn't currently seem convenient enough to reach critical mass. As these business models and their technology become more mature, I also hope we will start seeing more use of open standards, so I could use the Paris city bikes from the same account I might use the Berlin bikes, for example, or I could easily incorporate education modules from different providers.

The goal of “year of open source” is to investigate how free open source ideas have spread to other areas beyond software – to test out the theory and see how feasible an ‘open source life’ may be. How does it work so far? Will you manage to stay in the course until the end of your year?

It's not just about using open options, I also want to use my experiences to explain important ideas and concepts along the way. That means, for example, not just doing an open education course, but interviewing the people behind it, documenting my own experiences, and reporting on current practicalities and the future implications. Each step is a multi-stage process, and a much slower process than I had anticipated. Finding people to help me can be difficult but it's great when it all comes together – meeting Fabienne Serrière was a great catalyst for showing the process of hardware hacking, and the value of the public domain. I've discovered two main things so far - that I am really, really enjoying this process, and also that there's no way that I will be able to achieve all that I want to before August 1st. So this project will continue, albeit in a less intensive and more flexible manner, for much longer than the original year.

What was the hardest obstacle you had to overcome? Are there things you are missing?

I haven't found many good films under libre licenses yet, so I definitely miss going to the movies! Cinema has traditionally relied so heavily on fiercely-protected copyright for its business models, and the various approaches to modernizing and opening up the industry haven't really taken hold yet. Even when films are released under Creative Commons licenses, it's usually with the proprietary 'NonCommercial' clause.
My difficulty with this industry isn't just as a viewer - working out how to earn a living while releasing my work into the commons is an issue that I have to face as a videographer, too. Aside from the copyright side of things, there are also technical issues holding back filmmaking from going 'open source' – the sheer size of raw video files, the lack of high-quality free software post-production tools, and the difficulty of editing collaboratively, for example.

What was your biggest success personally?

When I started this project, I had no idea about programming and electronics, and my DIY skills didn't extend out of the kitchen. Now I've come to appreciate the value in just throwing yourself in and learning along the way. I'm hardly an expert now, but I've been able to learn the basics of a couple of programming languages, started experimenting with microcontrollers, electronic circuits and furniture design. Now I've created a parametrically-adjustable boxer short pattern and I even managed to make it without sewing my fingers together. I'm still editing the video, but if you run into me at OuiShare Fest I'd be more than happy to show you my undies!

The initial step into using and contributing to open source projects can often be a little daunting - while there are so many interesting projects, as well as information and support online, it's hard to know where to find everything. Repositories and resources like Github, Thingiverse, and Archive.org are great, but more work is needed to aggregate and filter the wealth of information available in the commons, to streamline documentation and metadata standards so people can easily incorporate free culture into their lifestyle.
In terms of widening the appeal, stable business models in free software, open source hardware, and free culture exist, but they aren't widely understood or apparent to someone engrained in the traditional way of doing things. (see Massimo Menichinelli's Business Models for Open Hardware for more)

Lately you visited a ‘Build Your Own 3D Printer’ workshop. What fascinates you about 3D printers and their economic implications?

In the short- to mid-term I can see 3D printing affecting the manufacturing market in a similar way to 2D printing in the publishing world. Having desktop printers in people's homes did not bring down the traditional book printing and publishing empires. Even e-books haven't really hurt them. But these days you have different options for different needs – many people have a printer in their home, they print off simple documents and images for their own use. There's also the neighbourhood copy shop for the use of a higher-quality printers and scanners, unusual formats and custom jobs. Then there are traditional printing businesses for making commercial products and publishing in bulk. A similar scenario is emerging with domestic 3D printers, makerspaces and services like Shapeways or Ponoko, but you still need traditional injection-moulding when you want to produce thousands of identical parts.
The real immediate benefit to 3D printing is still in rapid prototyping – being able to quickly turn an idea into a tangible, testable model. But things are developing amazingly quickly, and it's wonderful to see rapid improvements in quality, speed and diversity of application. As 3D printers like those of the RepRap project become more sophisticated and improve performance with different and multiple materials, maybe 3D printing will indeed one day turn the world upside-down as promised, and you'll be able to print rayguns, jetpacks and a replacement quantum-computer-enhanced brain in your choice of colour. Hopefully it'll be an open source brain so everyone can have one!