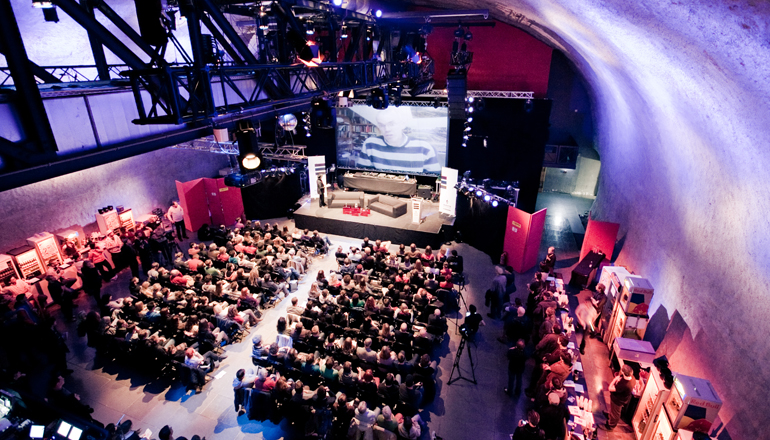 This year's extensive programme of workshops, lectures and panel discussions will zero in on two fundamental concepts of modernity: risk and courage.

Both terms stand for personal responsibility, progress, and commitment. Both are vehicles of social change. A large number of modern achievements - civil rights, freedom of the press, democracy - are the result of courageous struggles. However, while we often accept great risks in technological and economic developments, current crises like authoritarian tendencies in politics, rising social inequality, and climate change often lack courageous endeavours with sizeable impact. Is there perhaps a lack of courage to make necessary adjustments to the course, or are there simply no appealing narratives that point the way to tomorrow? And how do refugees, the politically persecuted and activists from all over the world deal with the often life-threatening circumstances they expose themselves to and more often than not are forced to expose themselves to?

More than 50 top-class speakers from 16 countries will be discussing questions of this nature across more than 25 panels, lectures, workshops and film screenings with the audience as well as among themselves. The conversation with Julian Assange, for example, is eagerly awaited. He will be interviewed live from his exile in the Ecuadorian embassy about current publications and the controversy surrounding WikiLeaks. The following day, international activist Heather Wokusch gives a multimedia introduction to the psychology of risk and courage. On Friday, Maxime Faget from the SeaNaps Festival and Peter Harris from the innovative music streaming platform Resonate will report on the enormous potential of blockchain technology and the risks of current communication infrastructure.

ARD journalist John Goetz alongside war photographer Kate Brooks and many others, will debate courageous journalism under sometimes adverse conditions. Activist art, political persecution and indigenous resistance worldwide are the main themes on Elevate Saturday, with guests including German playwright Angela Richter, the Russian artist group en/voinaVoina and human rights lawyer Tara Houska. The well-known Austrian animal rights activist Martin Balluch and the German author Raul Zelik, for example, are set to discuss the remission of democracy and the increasingly risky use of civil society protests in the face of stricter anti-terror laws.

Another thematic block is devoted to the incredible stories of people on the run: Vasilis Tsartsanis, a hairdresser from Thessaloniki, reports on his tireless efforts around the Idomeni refugee camp. The human rights activist Mahsa Ghafari, a winner of the Ute Bock Prize, will speak on #MeToo, feminism and new waves of antifeminism in another panel.

Also remarkable: In cooperation with the whistleblower protection organisation ExposeFacts.org, a host of prominent whistleblowers have been invited to Graz for the very first time: Thomas Drake (former NSA Executive), Jesselyn Radack (Nat. Sec. & Human Rights Attorney; former Ethics Lawyer Dept. of Justice), Matthew Hoh (US Foreign Service), Lisa Ling (Ret. US Air Force Sergeant), Cian Westmoreland (US Airman). Bearing the title "From Pentagon to Paradise", these insiders talk about their experiences and reasons for their willingness to take risks - first-hand. Bastian Obermayer from the Süddeutsche Zeitung will also report on his experiences dealing with the Panama and Paradise Papers. This session is curated in cooperation with ExposeFacts.org and co-moderated by Diani Barreto (ExposeFacts Berlin)

Many other exciting guests, lively debates and the opportunity to get to know civil society initiatives await us across five festival days at the beginning of March!

>> CHECK THE FULL PROGRAMME and ALL SPEAKERS