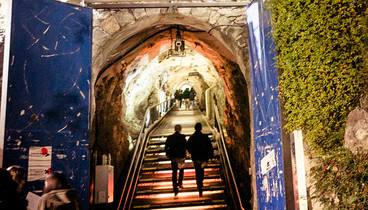 Creative solutions as a response to the central socio-political issues of our time are at the heart of the 11th edition of the Elevate Festival - in discourse as well as music & art.

Dance music, experimental sound art and world improvement – this unique European festival in Graz, Austria, is taking place for the 11th time this October. Lectures, discussion panels, film screenings and workshops during the day, awards show, concerts, performances and DJ-lineups in the evening - with this concept the Elevate Festival became one of the most influential forerunners for the synthesis of intelligent participation and progressive club culture.

The eleventh edition of the Elevate Festival once again aims to deliver fresh cuts of various electronic musics, literature and performance inside the uniquely intimate caves and tunnels of the Schlossberg.
This year's offering includes house & techno by Osunlade (US), Sigha (UK), The Black Madonna (US), John Heckle (UK), Suzanne Kraft (US), Heatsick (UK) as well as French musicians Etienne Jaumet (Zombie Zombie) and Low Jack.

Synth/kraut/voodoo/drones and a variety of experimental material will be featured at the Uhrturmkasematte. Live sets and concerts by Steve Hauschildt (US), Suuns & Jerusalem in my Heart (CA), HHY & The Macumbas (PT), Prostitutes (US) and Helm (UK) will be held in the bowels of the city's former dungeon.

As always we'll be exploring the hardcore continuum in the Tunnel with a very special set by Demdike Stare (UK) who will be debuting a hybridised DJ/live performance of their Test Pressings releases. Paradox (UK) will also grace us with a special live set revolving around his early Reinforced material on his Amiga.

We'll obviously make sure that there's plenty of bass in the place courtesy of Chicago dance music Pioneer DJ Funk (Dance Mania) and the critically acclaimed founder of Juke RP Boo. Venus X from New York will be stopping by for a set in Dom im Berg too.

Line up so far:

Creative Response is about creative thought and action in regard to the central socio-political issues of our time. While there will be a focus on inspiration and community-building, the Elevate Festival will also invite its audience and guests to take creative action: socio-political visions and concepts will be hatched and tangible opportunities for direct action will be developed. Inspiration will catch fire! Artists show creative response and thematic engagement and activists trigger change by shifting consciousness. Creativity as a means to overcome the crisis. Creativity as the initial impetus of change.

The first batch of early bird tickets is sold out. The second run is now available for 44€ (+ additional presale fee). Day passes will be made available at the beginning of September.
Click here:  https://ntry.at/elevatefestival2015

The entry for the discourse & activism part is free!