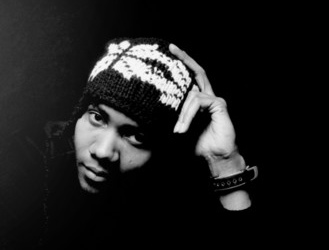 Paul D. Miller is a conceptual artist, writer, and musician working in New York. His written work has appeared in The Village Voice, The Source, Artforum, Raygun, Rap Pages, Paper Magazine, and a host of other periodicals. Miller's first collection of essays, Rhythm Science, was published by MIT Press in April 2004, and was included in several year-end lists of the best books of 2004, including the Guardian (UK) and Publishers Weekly. Sound Unbound, an anthology of writings on sound art and multi-media by contemporary cultural theorists will follow Rhythm Science.

Miller's work as a media artist has appeared in a wide variety of contexts such as the Whitney Biennial; The Venice Biennial for Architecture (year 2000); The Venice Biennial of Art 2007 (Africa Pavilion), the Ludwig Museum in Cologne, Germany; Kunsthalle, Vienna; The Andy Warhol Museum in Pittsburgh and many other museums and galleries. His 2004 solo show at the Paula Cooper Gallery in New York, Path Is Prologue, echoed his live music/theater/film performance, "DJ Spooky's Rebirth of A Nation, which ran simultaneously at the Lincoln Center Festival after premieres in Vienna and at Spoleto USA in Charleston, SC and continues to tour globally. 2007 finds him working with internationally acclaimed stage director and playwright Robert Wilson, and preparing to travel to antarctica to being research and production on his next large scale multimedia performance piece The Antarctic Suite.

But even with all this, Miller is most well known under the moniker of his "constructed persona" as "DJ Spooky That Subliminal Kid". Miller has recorded a huge volume of music and has collaborated a wide variety of musicians and composers such as Iannis Xenakis, Ryuichi Sakamoto, Kronos Quartet, Kool
Keith a.k.a. Doctor Octagon, Pierre Boulez, Killa Priest from Wu-Tang Clan, Steve Reich, Yoko Ono and Thurston Moore from Sonic Youth among many others. He also composed and recorded the music score for the Cannes and Sundance Award winning film Slam, starring critically acclaimed poet Saul Williams.

In addition to his numerous records and articles released under the DJ Spooky name, another important project was a collaboration with Bernard Tschumi, Dean of Columbia University's architecture department, and author of Praxis: Event Cities. This piece debuted at the Venice Biennale of Architecture 2000. In the magazine world, Miller is co-publisher along with legendary African American downtown poet Steve Cannon of the magazine, A Gathering of Tribes -a periodical dedicated to new works by writers from a multicultural context and he was the first Editor-at-large of the cutting edge digital media magazine, Artbyte: The Magazine of Digital Culture.

Miller continues to add to his creative output across a broad cultural spectrum. 2007 finds him in production on the DVD version of Rebirth of a Nation, set for mid 2008 release by Starz Media, while he continues his globe-trotting series of live events; playing at festivals from France to Japan to Mexico City; performing solo, with chamber groups, and with orchestras; and giving talks at prominent
universities and conferences.

Commons Of The Mind